Liverpool midfielder Fabinho out until January 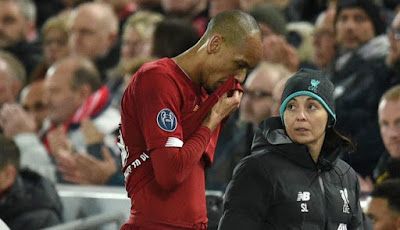 Liverpool midfielder Fabinho suffered an ankle ligament injury in Wednesday’s Champions League draw with Napoli and will be out of action until the New Year, the Premier League club said on Friday.

Fabinho was injured in a collision with Napoli winger Hirving Lozano and the midfielder limped down the tunnel in the 19th minute as Klopp took off the Brazilian and replaced him with Georginio Wijnaldum.

“Further assessment on the injury has discovered Fabinho will be out of action until the New Year.

“The Brazilian will begin a rehabilitation programme with the Reds’ medical team at Melwood as he works his way back to full fitness,” the club said in a statement.


The injury comes at a crucial time for league leaders Liverpool who are set to play eight fixtures in all competitions between now and the end of December, including a trip to Qatar for the Club World Cup.

The defending European champions are also yet to seal progress to the Champions League knockout stages, with one final away game at Salzburg next month.