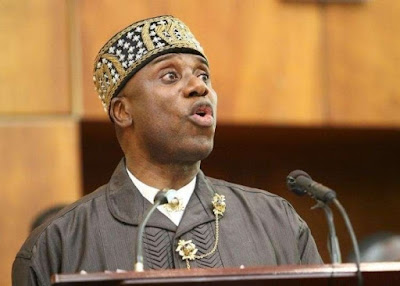 Amaechi gave this assurance while speaking to newsmen at the end of the project inspection tour onboard the train from Iju to Ibadan.

The minister, who noted that the Lagos axis of the project had been challenging due to urbanisation, said that the contractor had made significant improvements in the construction of stations.


“The contractor has assured us that by the 20th of December when we gather for next inspection, the tracks will get here (Omi Adio Station) in Ibadan, Oyo State.

“We have told you we will be out of this place (Lagos-Ibadan Standard gauge rail line) latest April (2020). We are no longer giving ourselves the time, the contractor now give us the time.”

“Most people have forgotten there are two contracts. The first contract is from Ebute-Metta to Ibadan.

“Then I came up with the idea that you don’t have railways that doesn’t end up in the seaport. That is the extension that is a little bit challenged now.

“They (contractor) can actually get to Ebute-Metta in the next one month. Getting to Ebute-Metta without getting to Apapa, we have not achieved much to clear the Apapa gridlock.

“The only easy way to clear the Apapa gridlock is to get the tracks into the seaport. By this, cargoes will just be loaded into wagons and taken up to Ibadan,” he added.

The minister said that the Federal Government still had the plan to commence test running the rail by the end of November.

“We will try and still keep to the 30th of November to start test running.

“We may not have enough coaches and locomotives for everybody but as many, as we can be taken, we will until the 20 locomotives that we ordered arrive.

“I hope they will arrive either by the end of December or second week in January,” he said.

On the completion of the stations before Dec. 20, the minister said that some equipment needed for finishing were yet to arrive from China.

He noted, however, that because of the pressure to deliver stations, the contractor now bought glasses and doors from Nigeria instead of importing them.

“The other things are still being expected from China. Pipes, cables and all sorts of things they are still expecting from China.

He said that some materials had started arriving and in two months they would install.
Amaechi said that the government had been building new flyovers, new overhead bridges, underpasses, dealing with pipes and a lot of other things in the Lagos axis.

“We pray we don’t meet it (such issues) in the Ibadan-Kano Standard gauge rail line. If at all we meet it, it will be in Kano but I am very sure it won’t be in the magnitude of Lagos.

Amaechi said that the Federal Government did not initially get the expected support at the Lagos axis which also slowed down the work pace.

According to him, the project has also been confronted with cases of stealing and pilfering of materials and equipment which has not been there all along.

He added that “the contract for Ibadan to Kano has already been awarded, as soon as we get the money, we will start and once we finish cargoes will be heading from Apapa to Kano.”