If I’m depressed, I just talk to young people -Okonjo-Iweala 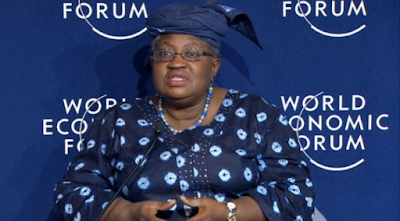 Ngozi Okonjo-Iweala, a former finance minister, says the Nigerian youth give her hope.

Okonjo-Iweala, a board member of Twitter, said this on Monday while speaking at an event organised by the African University of Science and Technology (AUST) in Abuja.

The former minister said if she wakes up feeling depressed she only needs to talk young people whom she said give her hope every single day.

While making a case for the youth, she asked Dorsey to note the talents the country has.

“What gives me hope every single day, is when I listen to our young people. If I ever wake up feeling depressed, I just need to talk to some young people, even my young children who are in their thirties,” the former minister said.

“I want to turn now to Jack, to Parah, to all of you who have come to honour us in the country, I want to say thank you so much for what have done, it is a fantastic team. It is because we felt so energised, we are seeing what they are doing in San Francisco and all over the world. Now that you have been to Nigeria, to Lagos and Abuja.

“We are not trying to force you into anything but we are saying that you have been introduced – we like having you interact and engage, and give courage and hope to our young people so they can use their skills on Twitter platform and other platforms to create jobs not just for themselves but for others.

Speaking earlier, the Twitter CEO said most of what has made the social media application viable was not created by them.

Dorsey said it was inspiring to hear stories of what the application has been able to achieve in Nigeria.

“Twitter, we have been around for just, well over 13 years. It has not felt much as a company. Most of what has made Twitter viable was not created by us,” he said.