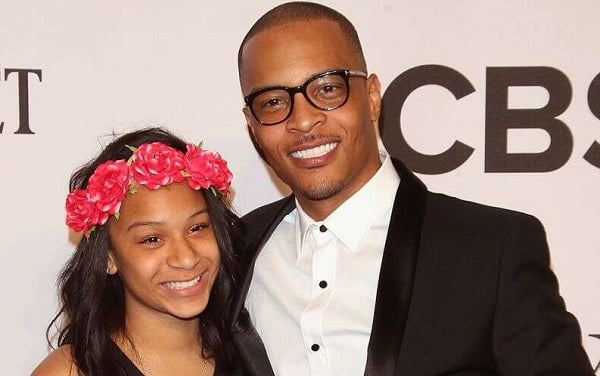 Clifford Harris Jr., American rapper and actor better known as TI, says he takes Deyjah Harris, his 18-year-old daughter, to a gynaecologist every year to check if her hymen “is still intact.”

The music star disclosed this during a chat with Nazanin Mandi and Nadia Moham, the hosts of a podcast titled ‘Ladies Like Us’.

The podcast, which started with questions about the rapper’s career and family life, assumed an intriguing dimension when TI opened up on his parenting style.

The 39-year-old rapper said he takes Harris to a medical expert annually for hymen check.


“I will say as of her 18th birthday, her hymen is still intact,” he said.

“Deyjah’s 18, just graduated high school now and she’s attending her first year of college, figuring it out for herself. And yes, not only have we had the conversation [about sex], we have yearly trips to the gynecologist to check her hymen.”

He also recalled telling her to go for one of such tests while she was unwrapping gifts given to her during one of her birthdays.

“So it’s this one time we go, I think this might have been after her 16th birthday,” said T.I.

“This is what we do… Usually, like the day after the [birthday] party, she’s enjoying her gifts. I put a sticky note on the door: ‘Gyno. Tomorrow. 9:30.

“He’s like, ‘Well, you know sir, I have to, in order to share information’ — I’m like, ‘Deyjah, they want you to sign this… so we can share information. Is there anything you would not want me to know?’ ‘See doc? No problem.’”

TI went on to say that his doctor even told him there are many other ways for a hymen to break besides sex and that many virgins no longer have their hymens intact — a statement he clearly did not accept.

“So then they come and say, ‘Well, I just want you to know that there are other ways besides sex that the hymen can be broken, like bike riding, athletics, horseback riding, and just other forms of athletic physical activity,’” he recalled.

The hosts expressed their shock at TI’s story and also joked Harris is a “prisoner.”

“Somebody check on Deyjah, she’s a prisoner in her home,” they said hysterically.

Hymen — a thin membrane located at the opening of the vagina — is often considered a yardstick to measure a woman’s virginity in some quarters.