I never expected to be father of triplets- Yinka Ayefele 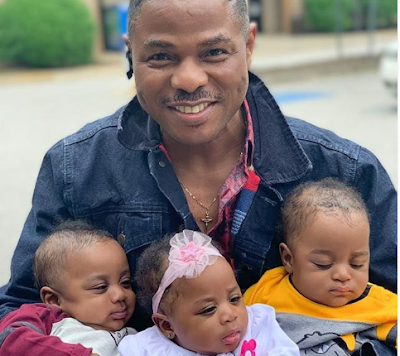 Undoubtedly, one of the news that dominated social media months back, was that of the birth of Yinka Ayefele’s triplets.

Many of his fans jubilated and could not hide their excitement over the good news.

Earlier this week, pictures of the artiste and the children– two boys and a girl– made the rounds on social media with many of the Tungba crooner’s fans expressing their joy.

In a chat with newsmen, Ayefele said: “My babies were actually born on January 18, 2019. They were delivered prematurely, so initially, I had to deny the reports when it went viral. I told those who saw me at the hospital in the USA not to disclose that I had given birth because I wanted my triplets to live. I was so scared initially for their lives, I didn’t want anything to happen to them health-wise but I thank God that everything is perfect now, they are doing very fine.


“It’s a thing of joy and I have never experienced it before. I never expected it too because when one is looking for the fruit of the womb, one may get one or at least two but not three. The first time I heard that my wife was pregnant, I was very excited. From the moment we confirmed she was pregnant, I couldn’t describe my joy. But on the day of delivery, seeing the scan, baby A, B and C, it now dawned on me that they were eventually coming to the world.”.