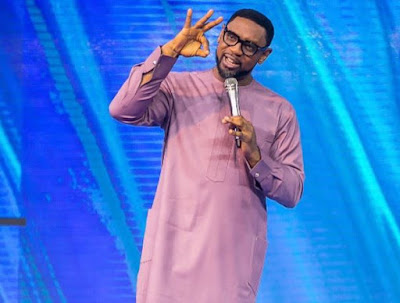 Biodun Fatoyinbo, senior pastor of the Commonwealth of Zion Assembly (COZA), has reacted to the dismissal of the rape case brought against him by Busola Dakolo — two days after the verdict was delivered.

On Friday, a high court sitting in Abuja had dismissed Busola’s rape case against the cleric and ordered Pelumi Olajengbesi, the celebrity photographer’s lawyer, to pay N1 million fine for wasting the court’s time and abusing judicial procedures.

Busola, had in a statement, acknowledged the court verdict but vowed to approach a superior court to intervene on the matter.

In a video making the rounds on social media, which appears to be from a recent COZA Sunday service, Fatoyibo described himself as a very emotional person, adding that he refused to comment on the court’s ruling at the time because he was weeping.

“I stood here for the last five minutes wondering how I can put myself together. I couldn’t talk on Friday because I was just weeping. I’ll try not to talk so that I don’t misbehave here. I’m a very very emotional person, I prepped myself up so I could just behave for a few minutes,” he said.


On Friday I was just weeping- Pastor #BiodunFatoyinho tells his congregation this morning, days after court dismissed his rape case with #BusolaDakolo
A post shared by Lindaikejiblog (@lindaikejiblogofficial) on Nov 17, 2019 at 2:29am PST

“Who shall bring a charge against God’s elect? It’s God who justifies. Who would dare to accuse us whom God has chosen? What accuser can harm God’s chosen?” Those who tried to find fault with Daniel were the ones who were put to shame at last. Satanic accusations always go before a Godly promotion.”