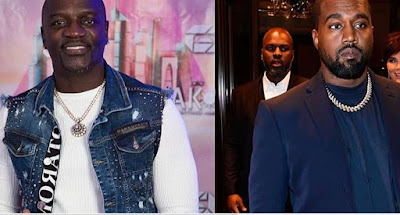 African –American singer, Akon has declared that he could run for the United States presidential seat in 2024 alongside Kanye West, rapper and entrepreneur.

Recall that Kanye recently revived speculations that he is interested in running for president in 2024, adding that he would create so many jobs and give voice to the many African-Americans living in the US.

In a recent encounter with TMZ, Akon spoke about his political ambition, hinting that he’s open to running alongside Kanye as vice president.

“I could run as VP with Kanye as president. I could do that 1000 per cent. You never know. Anything can happen. You never know. You just have to wait till that time to see that. I can’t predict,” said the ‘Lonely’ crooner.


The record label boss also spoke on Kanye’s fitness, adding that he has no doubt as regards whether or not he’s medically sound.

“I said it wasn’t crazy. Whether or not he’s unfit is a different conversation. I think he’s fine. But the world may think different, you know,” he said.

According to him, although he’s not aligned to Trump’s political ideology and Kanye’s seemingly close relationship with the US president, he could reach on a conciliation and work towards the greater good of people of all races in the United States.

“I’m nowhere near aligned with Trump. If that came to it, and we kind of went head to head, I think that would be a small conversation in the back of the room. I say, ‘Yo, you hold this position. I hold that position and that’s what makes us stronger, the fact that we both disagree’,” he said.

“Working together, we can now fulfil the overall play of what America is looking for. I think that would be a great compromise. Anything can happen. To me, it’s no competition. It’s a matter of what God wills it to be. But I think the combination could be something.”