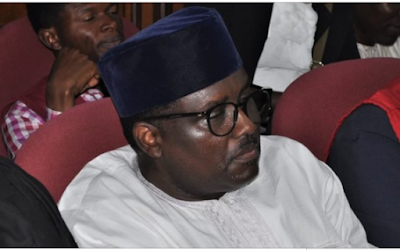 A Federal High Court, sitting in Abuja, Wednesday heard an evidence against the former Chairman of the Pension Reform Task Team, PRTT, Abdulrasheed Maina revealing a UBA account where he deposited a huge sum of N58 million naira suspected to be proceeds of crime with his son, Faisal as the only signatory.

It was also uncovered that Maina opened the controversial account under a business name called Alhaji Faisal Abdullahi Farms 2, pand, not as a private limited liability company.

Besides, it was affirmed that while Faisal was the signatory to the account, the company is entirely owned by Maina and he was in possession of its ATM to make withdrawals anywhere he goes.

The prosecution counsel, Mohammed Sadisu Abubakar, therefore, pointed out that Maina was running anonymous bank account using his son as front because it was inconsistent with the law for a man to run a venture and have a bank account where another individual is the only signatory.

It would be recalled that the Economic and Financial Crimes Commission, EFCC, is prosecuting Maina over alleged operation of anonymous bank account, money laundering and false asset declaration.

This development followed the recent arrest of Maina in an Abuja hotel with his son where the latter also allegedly pulled out a gun at the operatives of the Department of State Services, DSS.

But when Maina’s son who already has been in police custody was made to appear today before the court presided by Justice Okon Abang, the defence counsel, Francis Oransaye urged the court to order the Police to transfer his client from the Police Special Tactical Squad to Kuje Correctional facility.

Oransaye predicated his plea to the court on accessibility, saying, he had no access to his client.

In his words, “I wish to make an application for the defendant to be transferred from the Police Special Tactical Squad to Kuje Correctional facility as that will make it easier to have access to him as against the current situation”.

“We strongly believe that access to him is very fundamental in preparation to his defence”.

In his ruling, Abang said, “That the police refused them access to the defendant. There is no credible admissible evidence placed before the court that they were refused access.

“Learned counsel gave evidence from the bar reporting what he claimed another person told him. Court can’t take hearsay. His source is not in court to be put on oath to ascertain the truth. I’m not prepared to act in vain.

“I have no jurisdiction to vary my order. Application to transfer the defendant is hereby refused”.

Further, there were legal fireworks by the prosecution and defence counsels on whether or not the United Bank for Africa, UBA, account opening form by Maina for his Alhaji Faisal Abdullahi Farms 2, be admitted as exhibit.

While the prosecution counsel, Abubakar who cross-examined the UBA business manager, Mairo Mohammed Bashir, PW1, maintained that the account’s document be admitted as exhibit , the defence counsel, Oransaye opposed it.

It was also gathered that Bashir sourced for the deposit from Maina and subsequently created the account.

But Oransaye argued that it was contrary to evidence act for Bashir to tender the document for admission as exhibit before the court.

In his ruling, Abang said he entirely agree with the defence counsel that the document in evidence must be tendered by maker of the document but it would cause undue delay.

He said, ” PW1 can give evidence to avoid delay. The document is hereby admitted and marked exhibit A series.

Abang also adjourned the case to November 21 and 22 for continuation of trial.