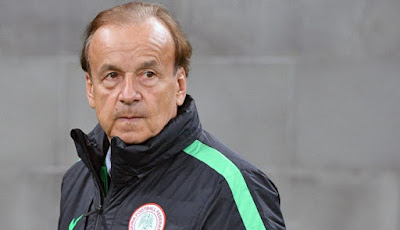 Super Eagles Coach, Gernort Rohr has expressed satisfaction with the African Blind Football Championship which kicked off in Enugu on Monday.

Rohr, who stated this in an interview with newsmen in Enugu on Monday, praised the organiser, Bina Foundation for staging a championship of such magnitude.

”I am satisfied with the organisation and they are doing a great job and I already find possibility in the visual impaired.

”To host teams from all parts of Africa is not an easy thing coupled that Blind Football is a wonderful institution so I can see great exhibition in the championship.


” I am looking forward to seeing goals in the match and you can see how the old and young among them are ready to play football.

” I had a lot of inspiration from the little I watched at my arrival in Enugu. It was a thing of passion for the players,” he said.

Rohr said that Morocco as the defending champions will be a hard nut to crack and that Africa can get a good team to the Olympic.

” I think that Morocco is a wonderful team to watch out for and Nigeria need to win the first match against Cameroun,” the coach said.

He said that all the teams are playing to win and he wished them success in the championship.

” It is nice to have a Blind Football academy in Enugu and also a team for Nigeria known as ” Star Eagles,” Rohr said.

The championship will serve as qualifying to the 2020 Paralympics.

Nigeria, which plays Cameroun in the opening game, is being represented by the Star Eagles.

The Proprietor of Blind Football in Nigeria and President of Bina Foundation, Lady Ifeoma Atuegwu, said the country was hosting to win the sole ticket for the paralympics.

Atuegwu said that in the absence of the male and female national football teams at the Olympics there was need for the country to make appearance using the blind football.