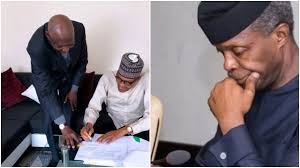 When Vice-President Yemi Osinbajo wrote to President Muhammadu Buhari seeking approval to continue his role in resolving the deadly farmers-herdsmen conflict earlier this year, he did so with little awareness that a middleman would intercept it, moderate it and ultimately discard his recommendation altogether.

Yet, that was exactly what transpired after Mr Osinbajo sent a memo to Mr Buhari earlier this year that was subsequently undermined by Abba Kyari, the president’s chief of staff.

After successfully rubbishing Mr Osinbajo’s request to Mr Buhari, Mr Kyari went on to instigate the president to take a detour from Mr Osinbajo’s committee that was raised to resolve the perennial violence between farmers and herdsmen,

The exclusive documents in our possession provide a rare glimpse into the humiliation Mr Osinbajo is facing at a time speculations are rife nationwide about how poorly the vice-president was being treated by the president’s senior aides and allies.

The documents showed Mr Osinbajo sought the president’s approval for three proposals relating to the development of the National Livestock Transformation Plan (NLTP). Mr Osinbajo had earlier been mandated by the president to lead the initiative with other governors in the National Economic Council (NEC).

The NLTP was proposed when the Buhari administration came under pressure to find a lasting solution to the incessant herdsmen violence that killed nearly 4,000 people between 2016 and 2018.

The plan included programmes of rehabilitation of displaced persons in states ravaged by the farmers-herders’ violence and development of ranches for nomadic herders in any willing state of the federation.

After months of preliminary consultations and inputs from affected states, an agreement was reached by states to form a substantive committee that would oversee implementation of the compromise, make NLTP the coordinating institution of all outstanding issues bordering on herdsmen crisis and coordinate funding for the transformation efforts.

In an April 12, 2019 memo to the president, the vice-president detailed the agreement to the president and requested approval. He mentioned that N35 billion had been earmarked for the livestock transformation policy, out of which N12 billion had already been released for ruga projects (construction of ranches for Fulani herders along designated grazing routes).

The entire N35 billion was pulled from the ecological funds of federal and state governments. The N12 billion was earmarked for emergency ruga projects in Niger, Zamfara, Kebbi, Kogi, Plateau, Taraba, Nasarawa, Benue, Kaduna, Katsina and Adamawa. The states were designated frontline states affected by the farmers-herders crisis.

Subsequently, since N12 billion had been earmarked for immediate use, Mr Osinbajo pleaded with Mr Buhari to release N22 billion for the longtime implementation of the project, including providing succour for people displaced by the violence in Benue, Plateau and other states.

Mr Osinbajo also stated in the memo (reference: SH/VP/NLTP/02/1) that the N22 billion would be deposited in a dedicated account with the CBN and only withdrawn for specific purposes as may be approved by the member states in the proposed Steering Committee.

But rather than forwarding the vice president’s memo to the president for approval, Mr Kyari held it for more than a month, eventually submitting it to the president on May 16. But before he submitted it, the chief of staff reworked the memo to include his own observation and recommendations to the president.

Mr Kyari told the president that the request by Mr Osinbajo should be rejected because the N12 billion voted for the Ruga projects had not been fully utilised.

“Given that the president has approved N12 billion for intervention for the Ruga Model, through the National Food Security Council (NFSC), we respectfully recommend that we first evaluate the development impact of this particular project before releasing further amounts for the NLTP,” Mr Kyari wrote. “This is key especially as major security operations are ongoing in some of these locations.”

On Mr Osinbajo’s request for an inclusive Steering Committee to be inaugurated to drive the livestock transformation policy, Mr Kyari knocked it as a duplication of efforts.

“This plan may not be an effective strategy due to the overriding importance of farmer/herder issues in the National Food Security Council, which Mr President is the chairman,” he said.

The chief of staff then proceeded to recommend that Mr Buhari should scrap the NLTP, an initiative by state governors and the vice-president as a representative of the administration.

“To avoid duplication of efforts, we respectfully recommend (with emphasis) that Mr President retains oversight of the farmer/herder issues under the NFSC,” Mr Kyari said, adding that the council includes all heads of security and intelligence agencies as well as representatives of governors from the six geopolitical zones.

Finally, Mr Kyari proposed the establishment of a National Livestock and Fisheries Commission that would be responsible for “formulating, implementing, monitoring and evaluating all projects relating to ranching, fisheries and other related issues.”

“Your recommendations above endorsed,” Mr Buhari said when he signed the memo with reference number: PRES/65-I/COS/2/996.
In approving Mr Kyari’s recommendations over Mr Osinbajo’s even without consulting with his deputy, Mr Buhari appeared to have more respect for his aides.

Presidency sources told our reporters there was no basis for the president’s action, which is just one of several acts of insubordination against the vice-president.

Mr Osinbajo addressed the memo directly to the president, and it is unclear why the chief of staff had to sit on it and eventually rubbishing the content before passing it to the president.

“It is not for the chief of staff to advise the president on a memo that came directly from the vice-president,” an official told our reporters under strict anonymity to avoid being victimised for discussing confidential State House matters.

“The vice-president issued the memo based on a policy he had been personally supervising,” the official said. ” So there is no basis, especially in writing, that it should be subjected to the advice of a subordinate.”

The official said it was not uncommon for a president to call his chief of the staff or other aides to seek verbal advice on an action he wanted to take over a request from the vice-president, but he would then have to first revert to the vice-president for further briefing and suggestions on areas that need improvement.

Another official told our reporters Mr Kyari took the step to retain powers for himself by proxy. If the approval sought by Mr Osinbajo had been granted, matters around the farmers-herders crisis would have been joint federal-states concerns and issues would have to be vigorously debated before funding is earmarked.

“He knows that if the president is in charge, he will be the one issuing orders over the livestock matters in the president’s name,” the source said.
“That would include spending monies without any questions or accountability unlike what would have happened if the Steering Committee had been approved.”

Mr Buhari abruptly suspended the ruga projects in July following an outcry from Nigerians that the establishment of Ruga settlements should be voluntary amongst states and not imposed by the federal government through the takeover of state lands.

Presidential spokespersons Femi Adesina and Garba Shehu did not return multiple requests for comments for this story.

PREMIUM TIMES obtained the memos as Mr Buhari was embarking on a private two-week visit to the United Kingdom.

On Monday, Mr Kyari flew to London to submit a new bill on offshore oil fields to the president for assent. The action drew sparked among Nigerians, who said it was embarrassing that the presidency would make a public show of such a controversial action.

“One of the acute dangers of the executive presidency in the third world is that it gives too much power to whoever the president chooses,” said political analyst Sola Olubanjo.