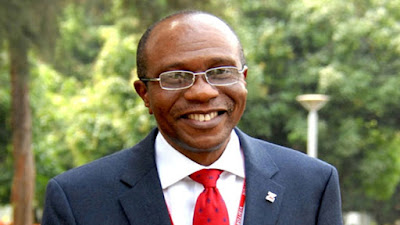 Governor of the Central Bank of Nigeria (CBN), Godwin Emefiele has appeared before the Senate Committee on Finance.

Mr Emefiele was invited by the Senator Olamilekan Adeola led Committee, on Monday, to offer explanations on the rationale behind the exchange rates the apex bank used for three key projects under the Presidential Infrastructure Development Fund(PIDF) being funded to the tune of billions of naira by the Nigeria Sovereign Investment Authority(NSIA) across the country.

Senator Adeola has raised an eyebrow on the use of N325 to a dollar exchange rate instead of the official rate of N305 in a government to government transaction for certain infrastructure projects.

Emefiele who could not meet up with the invitation however sent his deputy, Mr Sonubi Folashodun to represent him.


The lawmakers asked the latter to take his exit from the Committee session with a directive that Mr Emefiele should make himself available on Wednesday.

The Governor of the CBN, however, put up a dramatic appearance on Tuesday.

Emefiele apologised to the lawmakers for his absence on Monday and said he was on an official assignment with the Vice President, Yemi Osinbajo.

The CBN Governor highlighted the role of the apex bank as financial adviser to the government and regulator of monetary policy.

He said: ” First, I apologise for my absence at the committee’s sitting yesterday (Monday), I was unfortunately held down in another assignment where I was with the Vice president of the country.

“I want to put on record that the Central Bank of Nigeria recognises the special roles and the responsibilities of not only the Senate, the National Assembly but also the Senate Committee on Finance in the overall development of Nigeria regarding the banking industry.