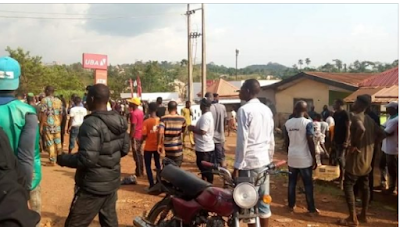 Asuquo Amba, commissioner of police in Ekiti, says the CCTV footage from a bank robbery incident in the state showed the staff taking money from the vault a few minutes before the attack.

A policeman and a girl were shot dead on Thursday when armed robbers attacked a bank in Oye-Ekiti local government area of the state.

Speaking on the development on Friday, the police commissioner said there seems to be connivance between the robbers and insiders in the bank.

Amba said the assailants attacked the police station in the town first before heading to the bank where they carted away over N25 million.

He added that Mohammed Adamu, the inspector general of police (IGP), had ordered an investigation into the incident.

“The IGP has directed that there must be a very thorough investigation and that this mode of operation must be brought to fore,” he said.

“What baffles me is that there was nexus between the robbers and insiders in the banking premises. The Oye Police Division is about one or two poles from here. It was the first point of attack. The bankers confirmed that they heard the shots and it took about 10 minutes before the robbers arrived at the bank from there.

“Within the period, there were some activities that went on inside the bank. It is either there was strict connivance, or that the bank officials took advantage to carry out their own intention which an investigation would prove.

Amba said the police recovered a carton containing over N2 million that was hidden in the bank before the operation.

“Despite the opportunity, none of them made efforts to escape, they were stuffing money and there is evidence to prove this,” he said.

“The staff opened the vault by 3.05 p.m. and the robbers blew up the security door at 3.12 p.m., this gave a strong suspicion that there was internal collaboration in this matter.

“The carton was hidden under the table within the banking hall. This should be part of the loots from the strong room.”