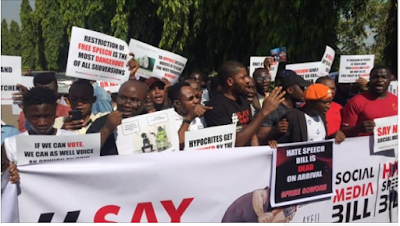 Protesters have converged on the National Assembly Complex in Abuja to vent against the bills seeking to regulate social media and curb “hate speech” in the country.

The protection from internet falsehoods and manipulation bill and the national commission for the prohibition of hate speeches bill were recently introduced in the senate.

Some Nigerians say it is a plot to clamp down on free speech and public criticism.


Despite intense opposition to the bills, only one senator — Chimaroke Nnamani from Enugu state — spoke against that which seeks to regulate social media before it was passed for second reading.

The protesters, who were stopped at the entrance of the complex by security agents, said the two proposed legislations infringe on the right of Nigerians to free speech.

The placards they displayed read: “It is slavery not to speak one’s thought”, “social media bill another draconian decree”, and “do not gag me.”

Some protesters took to social media to express their opposition to the bills as seen below:

We are Live at The National Assembly, Say #NoToSocialMediaBill Please Come and join us if you can pic.twitter.com/E5vPtgFIIJ
— Comrade Deji Adeyanju (@adeyanjudeji) November 27, 2019