9:51 AM CuteNaija 0 Latest News in Nigeria 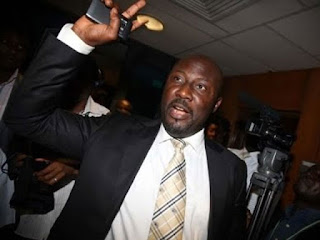 The candidate of the Peoples Democratic Party for the Kogi West senatorial rerun, Dino Melaye, has announced the death of his nephew, who was shot at his polling unit by suspected electoral thugs.

NigerianEye exclusively gathered that about an hour after Dino Melaye voted at ward 01, unit 004 in Aiyetoro town and left, suspected thugs numbering about 10 in two Toyota Hilux vans and a Honda Civic stormed the polling unit, firing gunshots into the air to scare voters to run for safety.

In the commotion, the attackers made away with the ballot boxes and electoral materials and in the process of escaping from the scene after youths made efforts to resist the attack, Dino Melaye's nephew was shot in the process.

His death was announced on Sunday morning via Dino's Twitter page.

My nephew Olorunjuwon who was shot at my pooling unit yesterday died this morning. My brother your death is a Supreme sacrifice in the struggle for the liberation of our people. Rest in peace aburo... So sad.
— Senator Dino Melaye. (SDM) (@dino_melaye) November 17, 2019