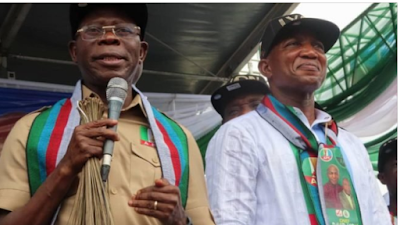 Since 1999 the Peoples Democratic Party (PDP) has held power in Bayelsa state. But the dominoes fell after Saturday’s governorship election in which the All Progressives Congress (APC) clinched victory.

Lyon defeated Duoye Diri, the PDP candidate, winning in six out of the eight local government areas in the state, and polling 353,552 votes.

But why was the APC able to break the PDP jinx in Bayelsa? Here are five reasons.

The battle for the state began about two years ago. It was fought at the state house of assembly, and it heightened during the 2019 national assembly election in the state.

Dickson, as governor, is said to have taken unilateral decisions on some issues. He is accused of not consulting stakeholders — not even his own deputy – and of disrespecting the party’s elders in the state.

He was accused of foisting Diri, his candidate, on the party over his alleged senatorial ambition. Diri, a senator, was said to be his trump card to the senate — if he had won the election.

A gale of defection of party members to the APC hit the PDP ahead of the election. Also, many of Dickson’s aides resigned a few weeks to the exercise.

The PDP camp was divided, which the APC capitalised on and inflicted a painful defeat on the party.

Dickson was said to have disrespected former President Goodluck Jonathan and some Bayelsa elders. Timi Alaibe, former NDDC managing director, was said to be the ”consensus candidate” and stronger contender to replace the governor.

But the governor was alleged to have worked in cahoots with Uche Secondus, PDP national chairman, to have his way in the governorship primary election, imposing Diri, his cousin, on the party, frustrating the emergence of Alaibe.

He was also alleged to have disparaged Bayelsa east — Jonathan’s zone (Ogbia, Nembe and Brass) — as non-core ”Ijaw people and traitors”.

The former president’s allies were said to have moved to the APC, though he did not campaign for the APC candidate out of respect for Dickson. But his wife, Patience, who is said to be Lyon’s god-mother, showed her support unabbreviated.

Nyesom Wike, governor of Rivers state, was also said to have backed Jonathan in his tacit support for Lyon.

The influence of the federal government is also believed to have played a role in the victory of the APC in the oil-rich state.

In the 2019 general election, the APC waxed stronger, pulling a relatively impressive performance in Bayelsa. The party polled over 35% of votes in the state. It also won a senatorial seat, two seats at the house of representatives and four seats in the state house of assembly.

With more resources, contacts and strength to pull the strings, the APC was in a good stead to clinch victory. Despite the legal spanners thrown into the works, the party pulled through.

And with Timipre Sylva, a former governor of the state and minister of state for petroleum resources, the APC was battle-ready for victory.

The APC candidate hails from Southern Ijaw local government area, which commands the highest voting strength in the state; hence, it was plain sailing for Lyon.

The results of the election showed that the highest number of votes was from Southern Ijaw — and most of them for Lyon. The APC polled 124, 803 votes in the area, while PDP had just 4, 898 votes.

OFF-CYCLE VOTE ADVANTAGE
Bayelsa operates an off-cycle vote owing to a legal tussle in 2008 which altered the electoral calendar. The APC assembled its armada for Bayelsa in the bid to deracinate the PDP. All attention was fixed on the state. Some APC governors even relocated to Yenagoa for ”real politik”.