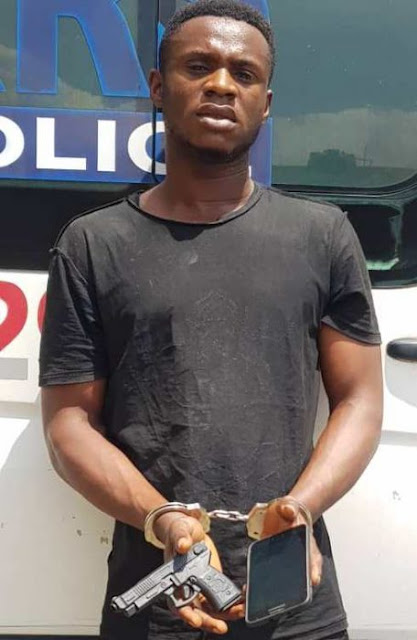 A church protocol officer in the habit of luring church girls to hotels and taking their unclad photographs and subsequently using the photographs to blackmail them in exchange for money has been arrested in Lagos.

The suspect, Victor Duru, a Madonna University drop out was arrested in Surulere, after repeatedly blackmailing his church members and girlfriend.

One of his girlfriends (name withheld) whose pictures he had taken in conjunction with his friend at gunpoint while lodging her in an hotel in Ijeshatedo called at the Rapid Response Squad, RRS headquarter to report her experience.


Duru, 23 years old and a protocol officer at a new generation church (name withheld) based in Oregun, Ikeja, Lagos was investigated and discovered to have been using the unclad photographs of his girlfriend to blackmail her in exchange for money.

It was also discovered that the suspect was keeping the unclad photographs of other girls while lodging them in hotels and his apartment in Ijeshatedo.

Sources revealed that the suspect obtained the unclad photographs of the victim with the assistance of a third party at gunpoint while there is a growing suspicion that Duru also laced the drink of another girl with sleeping drug as the photographs obtained from one of his mobile phones revealed.

The suspect, in his disclosure stated “she was my girlfriend. We are same church member. We have been dating for almost two years. We were having break up issues.

So, I invited her to an hotel in Ijeshatedo. I excused myself and invited my friend, Frank Obinna, to meet me in the hotel. Obinna and I had this planned together.

“The gun was a toy gun. He entered the hotel room and held the lady at gunpoint. I told her to cooperate, naked her for Obinna to take her pictures. We took seven different shots of her with my phone. I discharged her that day. This was in September.”

He continued, “by early October, 2019, I called her to give me N80,000 or I would throw the unclad photographs online. She was only able to offer me N10,000, which she transferred into my brother’s account.

“Last week, Obinna called her again and requested for N40,000. She promised to send something. She was a wonderful girl that had been assisting me before the problem started. On many occasions, she has assisted me financially.”

Duru, it was gathered attempted to escape from police custody in handcuffs while police were trying to effect the arrest of his accomplice, Frank Obinna in Ijeshatedo.

The victim, in her statement to the police alleged that she thought Duru’s friend was a waiter when he entered their hotel room. “He brought out his phone, I was asking my boyfriend what was going on, he slapped me telling me to remove the blanket covering my body.

“I refused. He dragged it out my body telling me to cooperate. I refused again. He asked his friend for the gun threatening that I cooperate. His friend took several shots of my unclad body. Both of them abandoned me at the hotel room after. I asked him almost a week after what he wanted to do with my photos and he told me that it was the beginning.

“The following Saturday, he threatened to put the photos online unless I pay N80,000 in order to delete them. I paid N10,000 with a promise to pay the balance afterwards.”

She added “after a week, his friend called me offering another option for me to pay him N40,000 and a night with him. I refused. He threatened that I would hear from them very soon.”

A source added that some of the ladies whose unclad photographs were found on his phone when contacted by the police to come forward in order to prosecute the suspect declined to push for a case.

The suspect along with some of the exhibits recovered from him (toy gun, mobile phones containing the n.u.d.e.s of the ladies have been transferred to the State Criminal Investigation Department (SCID), Panti for further investigations.

Commenting on the development, Commissioner of Police, CP Zubairu Muazu urged parents to warn their wards to watch the kind of company they keep.