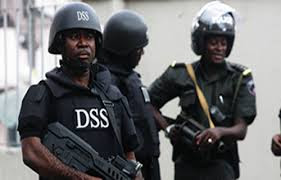 Operatives of the Department of State Services fired gun shots and used pepper spray to disperse protesters who were gathered around the service headquarters to demand for the release of Omoyele Sowore on Tuesday.

The protesters who were carrying several placards were rounding up their sit out when the incident occurred.

Convener of the protest, Deji Adeyanju was addressing the media on the reason behind the protest when truck loads of operatives some with masks arrived the scene and chased them away.

On sighting some of the protesters who defied the disperse order, an operative pulled out his service pistol and shot several rounds into the air.


Shortly afterward, another operative used pepper spray to force those who were seated to flee.

In the ensuing melee, some of the protesters left behind their placards, pairs of shoes and some personal effects.