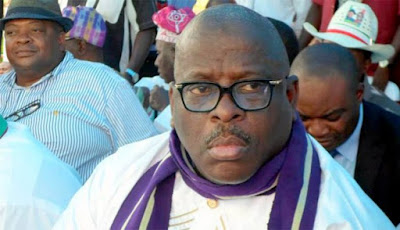 The Governorship candidate of the People’s Democratic Party (PDP) in Ogun State during the 2019 general election, Senator Buruji Kashamu, has congratulated President Muhammadu Buhari and the All Progressives Congress (APC) for winning the November 16 governorship elections in Bayelsa and Kogi states.

In a statement issued in Lagos on Monday, Kashamu said the misfortunes that have befallen the PDP was long foretold and self-inflicted.

He blamed it all on the National Chairman of the PDP, Prince Uche Secondus.”

The statement reads in part, “Secondus does not care about the interest of the PDP and its teeming members. He cares only about himself. He has long begun the process of emasculating the party through his many acts of impunity, high-handedness and crass arrogance as if he is the Lord of the Manor.


“But, the Almighty Allah has used President Buhari and the APC to prove to him that power belongs to Him alone and He gives it to whoever he wants. That is why the PDP lost woefully in Bayelsa State after being in power for 20 years.

“The theatrics leading to the election in Kogi State are all too familiar to be recounted. No thanks to Secondus’ bread and butter kind of politics.”

Senator Kashamu described President Buhari and the APC as being more politically savvy, urging them to continue to capitalize on PDP’s weaknesses until it learns useful lessons and retraces its steps like the prodigal son.

He urged President Buhari not to relent on his anti-corruption drive, saying it remains the unique selling point of the current administration.

The former lawmaker, who represented Ogun East Senatorial District in the eighth Senate, said the long years of corruption has affected the economy negatively and it will take some time to fix it.

“It is visible to all and sundry that President Buhari is on the right track in fixing the economy and improving infrastructure with several initiatives such as the Treasury Single Account (TSA), Deep Offshore Act, road and railways, among others.”

Senator Kashamu said he remains a chieftain of the PDP whether Secondus likes it or not, adding that he will continue to fight for the right things to be done within the party