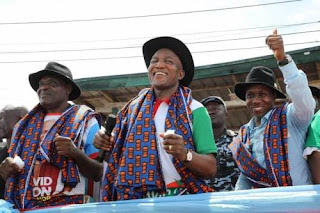 The Bayelsa State Governor-elect, David Lyon, has urged his rivals to team up with him to form an all-inclusive government upon assumption of office.

Lyon, who gave the call in reaction to his victory at the Saturday’s election, lauded peoples of the state for their overwhelming support during the just concluded poll.

The Independent National Electoral Commission, INEC, had declared Lyon of the All Progressives Congress, APC, winner of the Saturday election in Bayelsa State.

However, Lyon, in a statement described his victory as a divine orchestration aimed at salvaging the people of the state from the shackles of guided oppression and internal colonialism.

He said: “Bayelsa is one family, and no individual or group of persons irrespective of their political affiliations or standards can separate us from our collective destiny,” he said.

“There is no victor no vanquished in politics. We will not segregate ourselves from each other because of political differences. We must unite and move forward together, that is the next level agenda.

“We must integrate our state into the mainstream politics to attract rapid development into our state.”