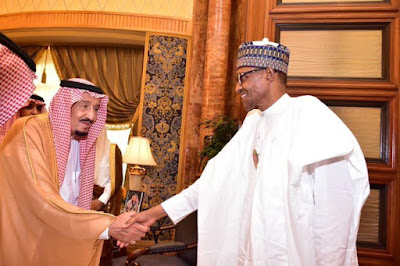 President Muhammadu Buhari should be commended, rather being condemned for his globetrotting, in search of investors.

This is the view of Governor Atiku Bagudu of Kebbi State. He spoke to the Ismaila Chafe, the State House correspondent of the News Agency of Nigeria in Makkah, at the end of the president’s visit and performance of his second Umrah this year.

Atiku Bagudu, who was also part of the President’s team during the visit to Saudi Arabia, said the president should rather be commended for his untiring efforts to boost the nation’s economy by courting influx of foreign capital.

Bagudu, who reacted to the recent trips of the president to Japan, Russia and Saudi Arabia, frowned at critics of the trips, saying they were being unfair to the president and Nigerians who would eventually be the direct beneficiaries of such economic diplomacy.

He, particularly, described the president’s trip to Saudi Arabia, where he participated in the Future Investment Initiative in Riyadh, as a very successful outing for Nigeria.

“It is an excellent outing for Mr President, President Muhammadu Buhari and us are honored to be part of his entourage to the conference which is tagged; Future Investment Initiative (FII) organized by the Public Investment Fund of Saudi Arabia, which is their Sovereign Wealth Fund equivalent to Nigeria’s Sovereign Fund, only that whereas ours is under three billion dollars theirs is in excess of 400 billion dollars.

“Mr President was invited by King Salman bin Abdulaziz, Custodian of the two whole Mosques, and that shows the respect with which Mr President is treated around the world and the honours he brings to Nigeria.

“Mr President in addition to participating in the summit, was also hosted by King Salman ibn Abdulaziz and he was visited by the Crown Prince, Muhammed ibn Salman, who showed unprecedented respect for Mr President, because rather than Mr President visiting him he decided to visit Mr President and agreed to invest in Nigeria.

“So, this is a very, very successful outing for Nigeria and it is consistent with our call for Mr President to be more active in economic diplomacy.

“It is noteworthy that Mr President has visited Russia, Japan, all in a bid to secure investments for Nigeria.

“This is the kind of activism – Mr President is not travelling to enjoy himself or on holiday but to bring investments for Nigeria.

“He (Buhari) just took a day off to come to Makkah and perform the Umrah and we are quite honoured that we participated with him in the Umrah.

“He was very, very energetic, very healthy as he displayed during the movement between the Safa and Marwah.’’

The governor expressed the hope that Kebbi would benefit immensely from the Saudi and other trips.

“The fields of cooperation will include many things that Kebbi state has ability to compete in, like mining, agriculture and even futuristic investments like Information Technology where our abled youths will be able to participate and compete,’’ he added.

President Buhari’s four-day visit to the Kingdom of Saudi Arabia came to an end on Saturday.

During the visit, the President participated in the Future Investment Initiative, which was christened “Davos in the Desert”.

“Apart from attending the summit, which had a debating format for global leaders, investors and innovators to  compare notes and share ideas, President Buhari held extensive talks with the Kingdom’s rulers, King Salman bin Abdulaziz and his son, the powerful Crown Prince Mohammed bin Salman.

“The Presidents meetings with the two prominent rulers marked an important upswing in relations between Nigeria and the Kingdom of Saudi Arabia,’’ Malam Garba Shehu, the President’s spokesman said in a special write up in Abuja on Sunday.

On the sidelines of the conference, President Buhari also held strategic meetings with the leadership of Saudi Oil and Gas group, the country’s Sovereign Wealth Fund and Public Investment Fund.