Are Osinbajo's aides really too much? 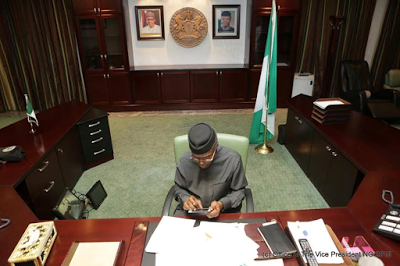 
I have heard some people arguing that the VP had too many people employed under his office. They need to get themselves educated on the duties assigned to him and the need for him to carry out those duties diligently, in the first term.

For example the Social Investment Programme (SIP) has a budget of N500b .

The budget and reach of the effort to execute that is more than what most of the states in Nigeria do. There is no state with 500 billion Naira budget, more so the need to incubate such program from the scratch free from any scandal and ensuring to coordinate a vast array of state and federal agencies.

A program that feeds more people than people that live in Liberia; add this to his job of propagating MSME across the country, leading presidential ease of doing business (PEBEC), engaging the national industrialization council or leading the various efforts statutorily under his purview from Borders/Boundaries to Privatization, BPE and NDPHC.


He equally was in charge of the National Economic Council, under which jointly with governors they manage issues about power, investments in agriculture (NLTP) and several other issues.

Doing this work, for which he has been praised requires dedication of individuals who are experts in these areas. These individuals have succeeded. Someone who managed the SIP program with less than 40 persons, it will be interesting to see if the new Ministry will be manned by just 40 persons. Of course it won’t. They will have a whole web of consultants, agency staff, Ministry staff, drivers, messengers and cooks.

Most states in Nigeria have between 5,000 and 30,000 employees excluding teachers and doctors. Most of them also have budgets less than 100 billion per annum covering territories 1/36 the size of the jurisdiction of Vice President’s duties delegated by the President, by law or the constitution.

The team the Vice President has was optimal for his work, and he continued to optimize which was why he redeployed his team to MDAs as soon as some of the programs matured and the President whom he holds in high esteem approved for their spin-off into ministries. This was the case with PEBEC and SIP.

The Vice Presdient should be allowed to do his job of making Nigeria a better place for us all without any limitation.