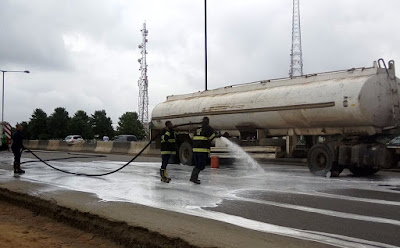 A major disaster that could have led to loss of lives was on Tuesday averted on Otedola Bridge, inward Berger area of Lagos, Southwest Nigeria, as an oil tanker laden with 44,000 litres of Aviation fuel fell and spilt its content.

According to the Lagos State Emergency Management Agency, LASEMA, preliminary investigations revealed that the fully loaded oil tanker with registration number EKY 814 XX, lost its cargo in the lone accident due to over-speeding and reckless driving on the part of the tanker driver.

The recovery team disclosed that when the incident occurred, the impact made the oil tanker, due to the dead weight of its 44,000 litres cargo, pulled off from its truck head, fell on its side, and started spilling its content on the ground.

Timely intervention, activities and collaborative efforts of LASEMA and the Lagos State Fire Service teams that doused the gushing flow of fuel from the tanker, averted any probable explosion.


LASEMA’s Director General, Dr. Olufemi Oke–Osanyintolu acknowledged the successful operation, but described occasional falling of tankers as one too many in the state.