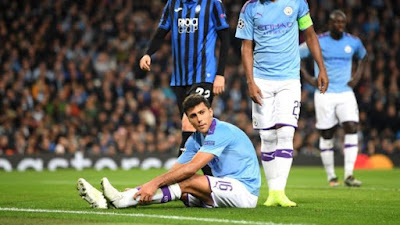 Manchester City’s threadbare defensive resources were dealt another blow Friday as Pep Guardiola confirmed Oleksandr Zinchenko and Rodri are set to miss the next few weeks.

Left-back Zinchenko has undergone minor surgery on a knee problem and could be sidelined for up to six weeks.

“He had contact with a knee. He felt something in the bone and has to stop,” said Guardiola.

“He had something to clean up the knee. It was not a big issue. Five or six weeks.”

Spanish international Rodri is a defensive midfielder by trade, but had been used by Guardiola at centre-back against Crystal Palace last weekend and before hobbling off with a hamstring injury early on in Tuesday’s Champions League clash with Atalanta.


“They told me after the (November) international break maybe he will be ready again.”

Both players are set to miss the crucial trip to Liverpool in the Premier League on November 10 plus the visits of Aston Villa and Southampton to the Etihad.

England international John Stones made his comeback from injury with two substitute appearances over the past week and Guardiola defended his decision to leave the centre-back on the bench to play converted midfielders Fernandinho and Rodri at the heart of his defence.

“It’s not about the first choice, it’s about being fit,” added Guardiola. “He has had many injuries. That’s why he couldn’t play.”