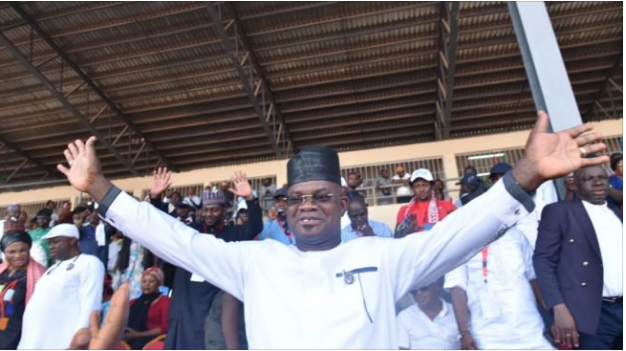 Natasha Akpoti, a member of the Social Democratic Party (SDP), has asked a federal high court in Abuja to disqualify Yahaya Bello, governor of Kogi, from the November 16 gubernatorial election, over alleged double registration as a voter.

Akpoti was a governorship candidate but she was disqualified by the electoral commission over the invalid nomination of her running mate.

In a suit marked FHC/ABJ/CS/1221/2019 and dated October 10, Akpoti said Bello allegedly committed the offence of double registration on May 23, 2017 at the government house in Lokoja after he had reportedly registered as a voter in Abuja in 2011.

The suit has the All Progressives Congress (APC) (first defendant) and the Independent National Electoral Commission (INEC) (second defendant) as defendants.

Mike Ozekhome, a senior advocate of Nigeria (SAN), filed it on her behalf.

Akpoti formulated three questions for determination by the court which reads; “Whether Yahaya Bello, the candidate of the 1st Defendant (APC) in the forthcoming Kogi governorship poll being organised by the 2nd Defendant (INEC) has by his act of double registration committed a wrongful act capable of disqualifying him as a voter or person to be voted for having violated the provisions of Section 24(E) of the Electoral Act, 2010 (as amended).

“Whether Yahaya Bello, the candidate of the 1st defendant in the forthcoming Kogi state governorship election is not liable to be disqualified and/or barred from participating or contesting in and/or voting for any political office for the next 10 years, pursuant to his flagrant violation of the provisions of Section 24(E) of the Electoral Act, 2010 (as amended).”

The plaintiff further asked the court to declare that Bello violated section 24(E) of the Electoral Act, 2010 (as amended) by virtue of his act of double registration as a voter, and a declaration that he is liable to be disqualified and/or barred from contesting, participating and/or voting in the November 16 Kogi governorship poll “on account of his wrongful act of gross violation of Section 24(E) of the Electoral Act, 2010 (as amended), which act of violation robs him of the capacity or vires to contest the forthcoming Kogi State governorship election.”

She also prayed for an order of the court disqualifying and/or barring Bello, or directing INEC to disqualify the APC candidate from the governorship race or for any political office for the next 10 years and an order of mandamus compelling or mandating INEC to investigate the allegation of double registration against Bello and as well prosecute him on completion of his first tenure of office as governor in January, 2020, among others.