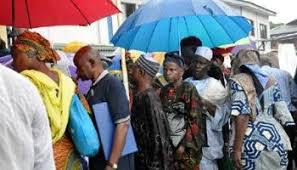 Scores of pensioners of the Nigerian Ports Authority in Port Harcourt on Wednesday besieged the main gate of the organisation in protest of an alleged refusal of the management to increase their pensions.

Some of them, who could manage to shout, said they had been suffering because the NPA management refused to increase their pensions, a development they said was causing untold hardship.

The pensioners, who are elderly men and women, had gathered at the gate of the organisation in the Rivers State capital, displaying placards with various inscriptions to drive home their message.

‘MD, NPA pensioners are senior citizens; pay us well’, ‘Enslavement of pensioners by NPA should stop’, ‘MD, Pensioners are dying everyday because of you’, ‘MD, pay us our constitutional increment’, ‘Please, give us our right; we’ve laboured for it’, and ‘MD, pensioners are dying of hunger. SOS’, were among inscriptions on the protesters’ placards.


The Chairman of NPA Welfare Association, Port Harcourt Branch, Elder Enoch Okoh, told our correspondent that the peaceful protest by the pensioners was aimed at drawing the attention of the entire world to their plight.

Okoh lamented that while some of his colleagues were bedridden in their houses, others had since died for lack of money to get proper medical attention.

“We decided to come out today so that the entire world will know why we are here. We are senior citizens of this country; we have paid our dues by spending 35 years in service and retired honorably.

“The management of NPA has been paying us our monthly salaries, but whenever there is an increase in the salaries of workers still in the system, they have never bothered to take our welfare into consideration.

“That is why we have been asking for increment in our pension for the past four years, but they have not listened to us. The pensions we are being paid cannot help us. As I talk to you, I have severe pain in my waist. I have gone for a medical check and the doctor says the only solution is to have an operation.

“But my six months pensions cannot help the situation. A lot of our colleagues have died, a lot of them are even bedridden in their houses because they cannot afford the cost of medication. That is why we say let us come out and make our demands so that the world will see us and sympathise with us.

“Our demands are that they should increase our pensions that have remained the same for over 10 years. Now, the government has increased salaries and wages for civil servants. Constitutionally, it should also affect pensioners all over the country,” added.

When contacted, a senior official at the NPA Port Harcourt, who pleaded anonymity, maintained that only the headquarters in Marina, Lagos, would be able to respond to issues concerning the pensions and pensioners.