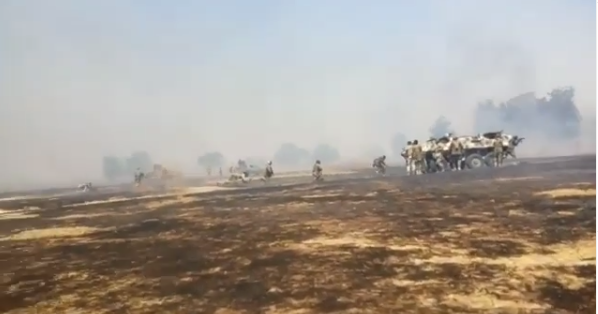 A Nigerian soldier took to Instagram to share a video from an encounter with Boko Haram insurgents in Borno state where he was deployed to.

The soldier revealed that they lost their commander and some soldiers during the recent fight with the insurgents. He further disclosed that the counter-combat against the Boko Haram insurgents started off by 5:15pm on October 8, but ended by 11pm as they kept coming out from "nowhere".

@Ijoba201425 wrote "October 8 this same time I am making this post was when we where attacked by BHT, I am writing this with tears in my eyes, what we thought was not what we expected but I thank God am alive to be a living testimony. May the souls of the fallen soldiers Rest In Peace, my commander, science student, PTe monday, PTe Akanbi, MST warriors and special forces warriors that died that day may their soul Rest In Peace.

All what I can say is thank you Lord what a bloody day. Keep praying for every soldier out there we made a lot of sacrifice we believe it is only God that can reward us. A fight that started 5:15pm till 11pm they keep coming like water, chaii make I no post much sha. On God"


Nigerian soldier shares video of fight with Boko Haram
A post shared by Lindaikejiblog (@lindaikejiblogofficial) on Oct 9, 2019 at 3:13am PDT