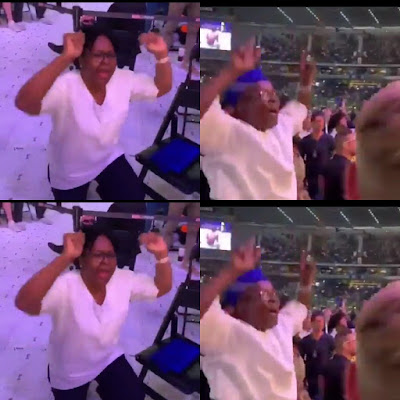 A video showing the celebration of the Adesanyas as their son, Isreal Adesanya emerged the UFC middleweight champion has been trending on social media.

In the video, which was shared by the ESPN NMA on its verified Twitter handle, the Adesanyas could be seen jumping wildly as it became clear that their son had won.


As the man, who was dressed in a white Nigerian outfit with a blue cap kept jumping and going in for a group hug with some of Isreal’s supporters, a woman, who appeared to be his mother, left her seat and went on her knees in a religious practice of giving thanks.

Nigerians on social media have been reacting to the video of the Adesanyas.


It was at this moment tears started rolling down my eyes. The joy, the relief, the emotions, answered prayers. Nigerian parents. If you know, you know... pic.twitter.com/WQx5txJHmX
— 👑 DaddyMo 👑 (@therealdaddymo1) October 6, 2019


Lovely!
I hope core Naija Parents learn to identify their children's natural potential and are given the wisdom to harness it.
Not everytime go to school and become a Doctor, Lawyer or Engineer
— Ocean Frank (@oceanriverz) October 6, 2019


The way @stylebender gives reverence to his parents is very telling of his character. You may not like his antics but you have to respect his family values 🇳🇬👊🏿
— Swanyay (@Swanyay) October 6, 2019