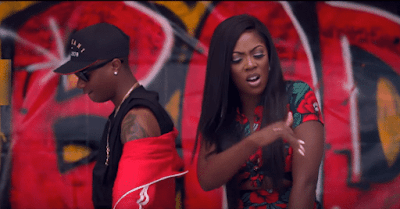 The relationship between Wizkid and Tiwa Savage is one that has raised eye brows over the years.

Though the duo often deny that they are just friends, their sexual chemistry says something entirely different.

A video in which Wizkid was captured on stage grabbing Tiwa Savage’s bum has surfaced online. This clip has triggered several reactions, with many bashing the single mother of one over allowing Wizkid to grab her bum.

An unperturbed Tiwa simply took to her Twitter page to react over the viral video.


“Issa soft yansh to press”- TiwaSavage reacts to viral video of Wizkid grabbing her bum #thenewsguru
A post shared by Media/News Company (@thenewsgurung) on Oct 27, 2019 at 9:26am PDT


In a recent interview with veteran broadcaster, Olisa Adibua on Beat FM, the 39-year-old ‘All Over’ crooner, Tiwa Savage stated that although she is very much single, there is a certain “friends with benefits” kind of friendship between them.

When she was pressed to reveal if the friendship was such that they were having casual sex with no emotions attached, Tiwa Savage stated that their friendship was beneficial in a way that they do shows and music together.

In 2016, Tiwa Savage released her first collaboration with Wizkid titled, ‘Bad’. The single was of course followed by a colourful video that has now amassed over 16 million views on YouTube.