VIDEO: Grandfather 'wakes up' at his funeral as mourners hear him knocking on coffin 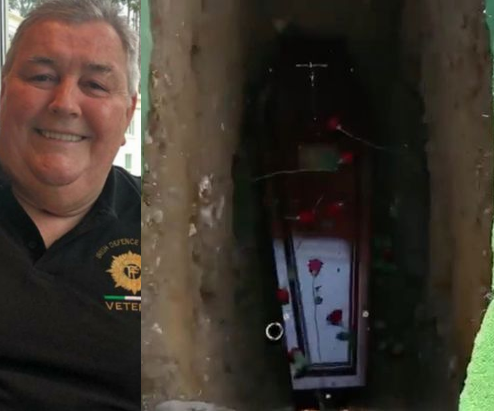 A grandfather brought joy to his family when he "woke up" at his own funeral.

Dublin man, Shay Bradley had all his loved ones together for his funeral. After he was placed in the ground, he managed to pull a prank on his family.

The granddad-of-eight had planned an elaborate prank before he passed away in a bid to give his mourners something to laugh about at his funeral.

Mourners gathered around Shay's open grave applauding as bagpipe music begins playing from an audio recording the dead man asked to be played at his funeral. However, the music soon stops and the grandfather's voice can be heard saying "hello" while knocking on what sounds like the inside of the coffin. He then screams "let me out".

Mourners can be seen moving back in shock before they realize it's a prank and that it was part of the audio recorded by the man before he passed.

Their tears soon turn to laughter when Shay can be heard saying "it's dark in here".

Shay continues: "Let me out. I can hear you! Is that the priest I can hear? I'm in the box, can you hear that?"

He ends the recording by serenading the crowd.

His daughter, Andrea posted the video on Facebook saying: "My dad's dying wish, always the pranksters, you got them good Poppabear and gave us all a laugh just when we needed it!! I will love you forever #shayslastlaugh."

She added on Twitter : "It was his dying wish that we played this at his funeral. What a man, to make us all laugh when we were incredibly sad. He was some man for one man. Love you forever Poppabear."