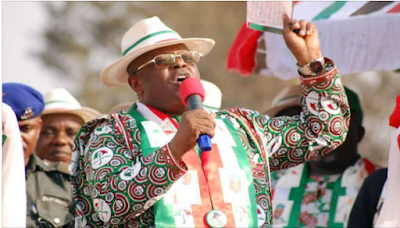 The governor of Ebonyi State, Chief David Umahi yesterday sacked one of his numerous Technical Assistants on social media, one Mr. Ndubuisi Goodluck Itumo for gross misconduct bordering on misinformation to the public.

The sack according to investigation may not be unconnected with the disclosure of the governor’s trip to China by the embattled Itumo.

It was gathered that Ndubuisi’s sack was announced immediately after he posted on his Facebook page, alleging that the governor will spend 23 days in China for economic trip without getting clarifications from higher authorities.

The sack was contained in a statement signed by the Secretary to the State Government/Coordinating Commissioner, Dr. Ugbala Kenneth Igwe.


The statement reads: “The appointment of Mr. Ndubuisi Goodluck Itumo as Technical Assistant (TA) to the Governor of Ebonyi State on Social Media, is hereby terminated with immediate effect.

“The termination is on grounds of gross misconduct bordering on misinformation to the public.

“Consequently, Mr. Itumo is directed to handover all government property in his possession to the Principal Secretary to the Governor before the close of work on Tuesday 29th October, 2019”.