9:51 AM CuteNaija 0 Latest News in Nigeria, Nigerians in Diaspora 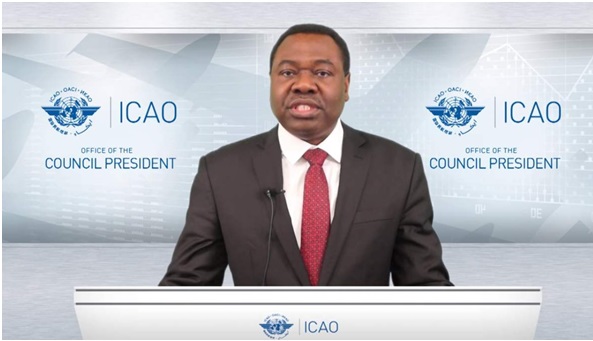 With the election for the Presidency of the International Civil Aviation Organisation (ICAO) round the corner and heating up, candidates are attempting to garner support through political maneuvering and lobbying efforts.


The ICAO Council elects its president for a term of three years. Dr. Olumuyiwa Benard Aliu, who is into his second consecutive term, is the fifth and current President of the ICAO Council. The Nigerian is vying for a third term.

Aysha Al Hameli, who is a Permanent Representative of the United Arab Emirates at ICAO, and Italian Salvatore Sciacchitano, are challenging the incumbent president's ambitious bid. Aliu's decision to contest again has rattled Ms Al Hameli in particular, who appears determined to derail the Nigerian's aspirations.

The Emirati candidate, who is a pilot by profession, was declared as a presidential candidate by UAE in September, 2018. For the past one year, she has been travelling extensively, seeking to influence most of the 193 ICAO members to vote in her favour. So far, she has made foreign tours to the US, most of the African countries, Russia, major European countries, Malaysia, India Japan, China and many more.

Negative campaigning
Ms Al Hameli's messaging and tactic is classical. She is going on the offensive through negative campaigning or mudslinging to worsen the public image of her oppoenent. For many, this is construed to be the ugly side of politics. But for some, winning is all that matters.

Rather than highlighting her strengths and what she would do to improve the standards of ICAO going forward, her campaigning revolves around an unfortunate incident that took place in 2016, when the Montreal-based UN aviation agency became a victim of a cyberattack. It was alleged that the ICAO attempted to play down the attack. The buck stopped at Secretary General Fang Liu and Dr Aliu.

The incident, though, underlined the importance of a quick and coordinated response when an organization faces a cyberattack. Since then, the agency  appears to have made robust improvements to its cybersecurity posture and approaches to mitigate further incidents.
Ms Hameli, though, is not letting go and is exploiting it to her advantage.

The candidate who spends the most money usually wins. While money is a necessary component of a campaign, big money provides a disproportionate advantage to a selected few, and  creates  an  uneven  playing  field.

With the backing of the UAE, Ms Hameli appears to have unrestricted access to funds to influence Council members.

Recently, she reportedly organised a party on a UAE-hired yacht in Montreal, Canada, where she was seen hobnobbing with a number of ICAO members. It was charm offensive at its best.

Ms Hameli has also conducted a private dinner with African groups and has requested for closer coordination with the other groups. Astonishingly, she appears to have succeeded in making inroads into the Nigerian Government in May, 2019. Reportedly, Nigeria has offered its support. The Nigerian ministry of foreign affairs also seems to be promoting Ms Hameli in other African regions.

Does it all mean that Dr Aliu, Nigeria's own, has been abandoned? If so, there is no stopping Ms Hameli.