Tiwa Savage finally opens up on relationship with Wizkid 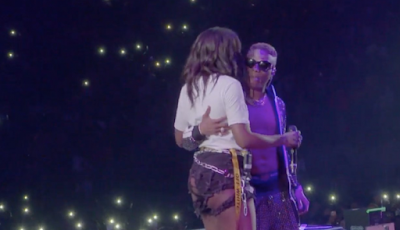 The relationship between Tiwa Savage and Wizkid has been one of the most talked about issues in the Nigerian music industry.

The talented duos have done songs together and have such undeniable chemistry that raises eyebrows.

In a recent interview with veteran broadcaster, Olisa Adibua on Beat FM, the 39-year-old ‘All Over’ crooner, Tiwa Savage stated that although she is very much single, there is a certain “friends with benefits” kind of friendship between them.

When she was pressed to reveal if the friendship was such that they were having casual s3x with no emotions attached, Tiwa Savage stated that their friendship was beneficial in a way that they do shows and music together.


“We are friends, very good friends. There are few benefits; we do shows together, we do music together, we make money together,” she said.

In 2016, Tiwa Savage released her first collaboration with Wizkid titled, ‘Bad’. The single was of course followed by a colourful video that has now amassed over 16 million views on YouTube.