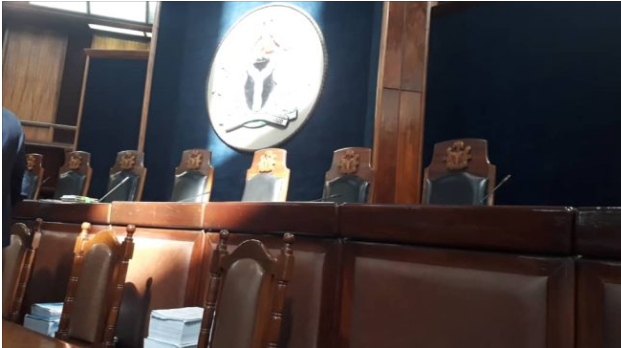 The supreme court has given its verdict on Atiku Abubakar’s appeal against President Muhammadu Buhari’s election victory.

After about five hours of sitting, a seven-man panel led by Tanko Mohammed, chief justice of Nigeria (CJN), held that the appeal by the PDP presidential candidate lacked merit.

It upheld the judgement of the presidential election petition tribunal which affirmed Buhari’s election.

Here is how the proceedings unfolded?

The PDP candidate suffered his first loss when the apex court rejected his plea to allow him to adopt all the briefs filed.

Levi Uzoukwu, Atiku’s lead counsel, had requested that all lawyers adopt their briefs, both in the main appeal and in seven other interlocutory appeals.

But the panel turned down the request. It held that the main appeal covers the interlocutory appeals as well.

‘MUHAMMADU’ NOT SAME AS ‘MOHAMED’

The variation in the spelling of Buhari’s name was brought to the fore again. This time, Uzoukwu insisted that the second respondent (Buhari) failed to prove he is the owner of a certificate tendered as an exhibit.

He said the APC candidate failed to give any explanation for the discrepancy in his first name “Muhammadu”, and that which appeared in the exhibit, “Mohamed,” and that the tribunal was wrong to have speculated without evidence that the second respondent also bears “Mohamed”.

But Wole Olanipekun, Buhari’s counsel, opposed his argument. He argued that the PDP counsel had a similar case at the appellate court, but that it was overlooked.

He said while Uzoukwu was called to the bar by the name, ‘Levinus Onyemachi Uzoukwu’, he uses only ‘Levi Uzoukwu’ and so, he cannot question Buhari’s own case.

He also said the variation in Buhari’s name depends on the persons pronouncing it.

‘BUHARI WAS NOT QUALIFIED TO CONTEST FOR PRESIDENT’

The PDP counsel argued that Buhari was not qualified for the election because he allegedly failed to tender any of the certificates he said he acquired.

He said none of Buhari’s witnesses gave evidence as to what the certificates look like.

But the president’s counsel countered his argument. He said the Nigerian constitution does not mandate a presidential candidate to attach his certificates as evidence of qualification.

On server, Uzoukwu said section 52(2) of the electoral act which INEC relied upon in rejecting the use of sever has been amended and deleted from the electoral act, and so, the argument is baseless.

But Yunus Usman, INEC lead counsel, asked the court to dismiss Uzoukwu’s submission, saying the amendment only states that INEC has discretion on how to transmit election results.

In the same breath, Buhari’s lawyer said the court of appeal did not agree that there was a server contrary to the appellant’s submission, and that the conclusion is that, “there was a website managed and controlled by INEC”.

Usman also said PDP’s argument on polling units lacked merit because they failed to call witnesses as required by the law.

The APC had only one prayer: That the supreme court throw out the appellants’ appeal “as far as hands can go”.

Lateef Fagbemi, APC counsel, concurred with Olanipekun’s submission, and asked the apex court to “throw out the appeal as far as hands can go”.

And it turned out to be the case.