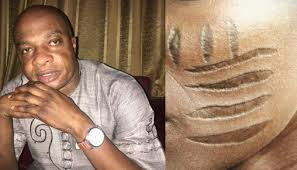 Veteran actor, Ebun Oloyede a.k.a Olaiya Igwe has declared that he regrets having a tribal mark. He noted that having tribal marks is an uncivilized act.

Speaking in a chat with newsmen, he said: ”Tribal mark is not a culture. It is an uncivilized act. It is not a DNA, because as at that time they believed it is Yoruba DNA. It is very easy to recognize one another outside that you are from the same compound, but who told them that I belong to their family or part of their family? It is only my mother that can tell if I belong to the family or not. What if my pregnancy belongs to her concubine, but she brought it to my father? Which is very possible then, and there was nothing like DNA test to check the true paternity of a child then. Look at our father, Alaafin Oyo, a very handsome man even with his tribal mark, though some of his children have tribal marks, but what about the grandchildren? None of them has a tribal mark. That is to tell you that tribal is not our tradition, it is not our culture, because if it is, somebody like Alaafin Oyo should keep and promote the custom till date because he’s our father. If it is our culture then it shouldn’t have disappeared from the palace; it shouldn’t have been erased from the palace. It is purely an act of wickedness. Thank God for civilization that completely erased it. If it is something important or part of our culture, all my 7 children should have it because I have it”.

Speaking further, he noted that Nigeria doesn’t appreciate entertainers, adding that it is difficult for him to celebrate his 40 years on stage anniversary.


“I feel so happy and excited. Though at times, I still feel bad because of the country I found myself; a country that doesn’t appreciate artistes; a country that doesn’t see artiste as somebody they need to appreciate or recognized; especially by our government. We are just trying, patching everything up, but we still have to thank God. If by now I have a jet, or you point to a jet and they said it belongs to Ebun Oloyede, I deserve it considering my input so far.

I formed my own theatre group; Olaiya Films Nig. Ltd., in 1979, about 40 years ago. It is very difficult for me to say I want to celebrate 40 years on stage because of the present situation, but like I said, I still have every reason to thank God, at least I’m still alive”