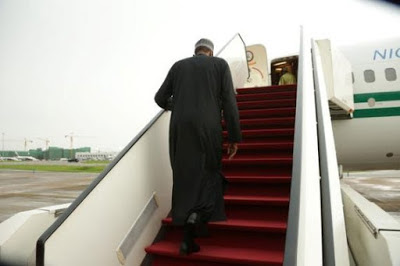 President Muhammadu Buhari and Vice-President Yemi Osinbajo will spend a total of N3.327bn on foreign and local trips in 2020.

The figure is contained in the details of the 2020 Appropriation Bill that Buhari presented to a joint session of the National Assembly on Tuesday.

A breakdown of the N3.327bn allocated to travels for the two officials in 2020 shows that Buhari will spend N2.526bn on his trips while Osinbajo will spend N801m on his trips.

A further breakdown shows that Buhari’s foreign trips will gulp N1.751bn while N775.6m will be spent on his local trips for the year.

The figures are outside the N182.25m allocated for travels and transport in the budget of the State House Headquarters.

Also in the bill, a total of N149m was allocated for foodstuffs and catering material supplies for both Buhari and Osinbajo.

While the President is expected to spend N98.3m on the item, N50.88m was budgeted for Osinbajo.

Apart from the N149m foodstuffs and catering material supplies bill, the two government officials will also spend N43.916m on refreshment and meal.

This is apart from the N135.668m budgeted for the same refreshment and meal in the budget of the State House Headquarters. For honorarium and sitting allowance, both of them will spend N184.438m.

N478.313m was allocated to the same honorarium and sitting allowance in the budget of State House Headquarters.

Still under the budget of the State House headquarters, a whopping N4.062bn was allocated to what was tagged “annual routine maintenance of mechanical/electrical installations of the villa.” The project is said to be an ongoing one.

N526.234m was also allocated to what is called “phased replacement of vehicles, spares and tyres in the presidential, CVU security/police escort and State House operational fleets.” The project is also described as an ongoing project.

Apart from these, N389.64m was also budgeted for “outstanding liabilities on routine maintenance and other services for 2016.”

N32.199m is budgeted for fuel and lubricants (general); N32.5m for wildlife conservation; and N45.4m for sewage charges.

Meanwhile, the House of Representatives concluded the second reading of the 2020 Appropriation Bill on Thursday and adjourned plenary till October 29, 2019.

During the continuation of the debate on the key assumptions of the budget, many lawmakers criticised various aspects and allocations in the financial proposal.

A member from Lagos State, Babajide Obanikoro, said the amount allocated to health was grossly inadequate, considering the over 180 million population of Nigeria

In his submission, Yusuf Gagdi, faulted the borrowing and debt servicing plan. He also stated that the total amount voted for education, about N160bn, was not comparable when considering other African countries.

“The capacity of any government is dependent on its own educational system. As the Giant of Africa, education budget should supersede others in Africa,” he said.

The Speaker, Femi Gbajabiamila, who presided over the plenary, referred the bill to the standing committees, also known as Sub-Committees on Appropriations.

Addressing journalists after the plenary, Chairman of the House Committee on Media and Public Affairs, Mr Benjamin Kalu, noted that the lawmakers had been working on the budget as scheduled.

Kalu also noted that contrary to the public outcry that the National Assembly had become a rubber stamp of the Buhari-led Presidency, the lawmakers had freely criticised the budget, showing that they were not an appendage of the executive

He said, “Today is Thursday and a lot has happened between Tuesday and today. I want to say that, just as we promised that we are going to support the executive in realising this goal of reversing the budget to a January-December calendar. We mentioned that we drew a road map towards achieving that. In our timetable which we announced here on Tuesday , we said we would start debate on Wednesday on the general principles of the budget estimates, that actually took place.”

Organised labour on Thursday said it had set up a team to study the 2020 budget presented by President Muhammadu Buhari to the National Assembly, saying that it was expecting the report of the committee tomorrow.

President of the Trade Union Congress, Quadri Olaleye, told one of our correspondents that a statement would be released on it after the report is submitted on Saturday.

He said, “We are not making a comment now because we have a team that is doing the analysis of the Federal Government budget which President Miuhammadu Buhari presented to the National Assembly. On Saturday, we will have the full report of the analysis, that is when we will make general comment on the budget.”

Meanwhile, Secretary of the Joint National Public Service Negotiating Council, Alade Lawal, said the Federal Government must show if the budget was workers’ friendly by accepting labour demands on the consequential adjustment arising from the new minimum wage of N30,000.

He said, “Let me be frank with you, budget is annual ritual. If the budget is workers’ friendly, let the Federal Government demonstrate it through the consequential adjustment that we have been negotiating with it as a result of the new minimum wage.”