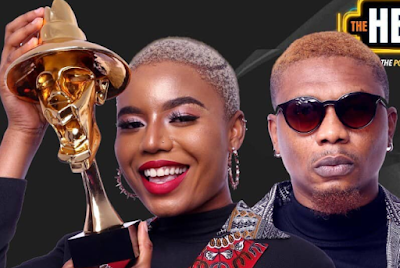 The organizers of The Headies have announced the duo of Nancy Isime and Reminisce as the official hosts for the 2019 show.

The announcement was made via their social media pages.

The Headies award show is scheduled to hold October 19th, 2019.

Born on 26th of January in Kaduna State, Remilekun Abdulkalid Safaru, known by his stage names Reminisce or ALAGA IBILE, is a Nigerian singer, rapper, and songwriter from Ajilete, Yewa South LGA in Ogun state. He studied purchasing and supply at Kwara State Polytechnic. He delivers his rap line in both English and Yoruba.

Nancy Isime was born in Edo State on December 17, 1991. She’s a model and media personality. In 2009 she won the Miss Valentine International beauty pageant, and began a career as an actress in the TV series Echoes in 2011. She has since appeared in several films. In 2016 she replaced Toke Makinwa as the presenter of Trending on HipTv, she has since carve a niche for herself as a top TV girl in the country. She will be co-hosting the 13th Headies with Reminisce.