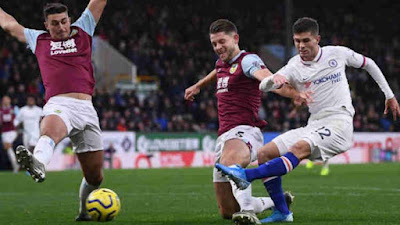 Chelsea beat Burnley 4-2 in the Premier League on Saturday at Turf Moor, with Christian Pulisic marking his first league start since August with a hat-trick.

The American’s clinical finishing was what the Blues needed for their seventh straight win in all competitions; first, he deceived James Tarkowski to open the scoring in the 21st minute with his left foot before adding a second just before half-time with a right-foot shot which deflected off Ben Mee and past Nick Pope.

Pulisic sealed a perfect hat-trick after the break when he nodded Mason Mount’s cross beyond Pope in the 56th and Chelsea looked in danger of running riot when Willian added a fourth two minutes later.

Chelsea appeared likely to make it five when Callum Hudson-Odoi was awarded a penalty, but a VAR review overturned the decision and the substitute was booked, which seemed to act as a cue for the Blues to let up on their intensity.


Burnley were given a glimmer of hope out of nowhere late on, with Jay Rodriguez’s stunner in the 86th and Dwight McNeil’s deflected effort in the 89th giving the hosts something to smile about, but it was Chelsea beaming at full-time as they moved level with third-placed Leicester on 20 points.