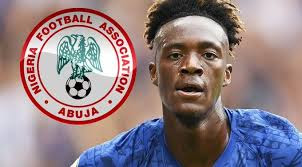 Tammy Abraham’s decision to snub Nigeria for England has not gone down well with former England international and Wimbledon FC star, John Fashanu, who believes the 20-year-old made the wrong footballing decision.

The Chelsea academy graduate became a subject of tussle between the English FA and the Nigeria Football Federation after posting scintillating performances for the Blues in the ongoing league campaign.

But England manager, Gareth Southgate, moved ahead of Nigeria by including Abraham in his squad to face Bulgaria and Czech Republic for the Euro 2020 qualifier much to the disappointment of many Nigerians who had hoped that the in-form striker will commit his future to Nigeria.

And Fashanu, who also featured for the Three Lions has told the Chelsea striker to have a rethink so as to prevent history from repeating itself- citing his own case as an example.

“I’ve now been living in Nigeria for 14 years and I know that I made the wrong choice not playing for Nigeria.

“For him right now, everything looks like England is fantastic and wonderful. But it is only like I did, as he gets older he will realise that Nigeria is his motherland and as we have our problems in Nigeria, England also has its problems.

“What I want to tell Tammy Abraham is to make the right choice and play for his motherland which is Nigeria. He will have more time and make more appearances playing for Nigeria but the truth is he will make more money playing for England.

“But as a patriotic Nigeria I would have loved him to play for Nigeria. Don’t make the same mistakes that we elders made then.

“As an elder in the game, I can only offer advice. My advice to Tammy is to forget about money because money will come and go.

“Come back to your motherland and play for the country which I didn’t do. That’s my advice because now I know where I went wrong. I made a lot of money but I only played for England twice. I could have still made money with the Nigeria national team and made more appearances and helped the country to win many trophies and do wonderful things.

“Now I look back and see some of the mistakes I made and I don’t want him and other young Nigerians to make the same mistakes that I made.”

The Wimbledon legend though admitted that the final decision lies with the 21-year-old player.

“At the end of the day we must understand that his choice is his own choice.

Though, we can influence his choices but he is a young man and a wonderful player who is in the best year of his life and he knows what it’s like.