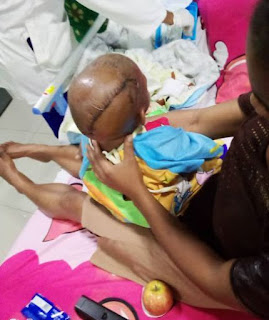 The 13-months-old baby boy, who was severely attacked by a pit bull dog on Tuesday, October 8, has been saved by doctors of Cedarcrest Hospital, in Apo District of Abuja.

The baby, Michael Duniya, who was attacked by the pit bull dog at Mambilla Barracks, Abuja, went through several surgeries that turned out were successful.

Recall that it was reported that the 1-year-old boy was playing outside when he was sighted by the dog. The dog wasted no time in pouncing on the little boy, immediately going for the 1-year-old head. It would have been a different story if not for the residents of the barracks. 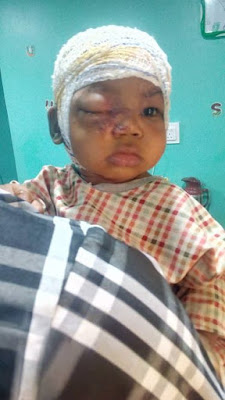 The dog began feasting on the 1-year-old boy, using its teeth to tear into the boy’s skull. The boy’s life was timely saved when a woman from nearby saw what happened  Immediately residents of that area realized what was happening,

Residents rushed to help the 1-year-old boy, but their efforts seemed unsuccessful, as the dog refused to let go of the boys head.
A witness also said: “His older brother immediately dashed into the house, but Michael was not quick enough as the dog pounced on him”

“It grabbed Michael by the head and pulled him about 30 metres away after biting him,’’ said a witness.”