PHOTO: Students made to wear boxes on their heads during exam to prevent cheating 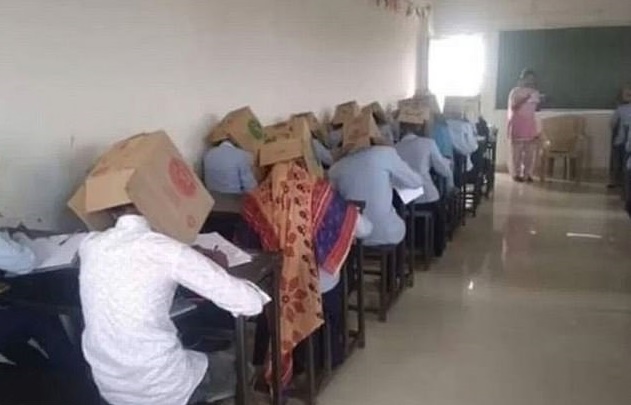 A school in India has apologized after photos emerged of students wearing cardboard boxes on their heads during an exam in bizarre anti-cheating measure.

The stunt, which had been intended to stop the students of Bhagat Pre-University College in Haveri, Karnataka state from copying each other’s work, went viral on social media, after a staff took to Facebook to share pictures of the students during the exam.

The images show the students wearing the carton boxes of sold-out merchandise, that had been cut open on one side, on their heads, as the examiner supervised the hall.

Following the public outrage that trailed the “unorthodox measure”, officials of the school issued an apology, admitting that the school had only implemented the boxes on an “experimental basis” after seeing it being done elsewhere.

“There was no compulsion of any kind. You can see in the photograph that some students were not wearing it. Some who wore it removed it after 15 minutes, some after 20 minutes and we ourselves asked them to remove it after one hour,” MB Satish, the college administrator, told BBC Hindi.

#Karnataka students made to wear cartons on their heads to avoid copying in exams. pic.twitter.com/FOagX0U0tz
— dinesh akula (@dineshakula) October 19, 2019

SC Peerjade, deputy director of the local Pre-University Education Board, described the practice as “inhumane”.

“When I got a message on this, I immediately went to the college and ordered the management to stop the practice,” he was quoted by the Times of India as saying.

“I also issued a notice to the college management and am contemplating disciplinary action against them for implementing this idea.”

Suresh Kumar, the state education minister, also disclosed that the issue would be aptly dealt with as “nobody has any right to treat anybody, more so students, like animals.”