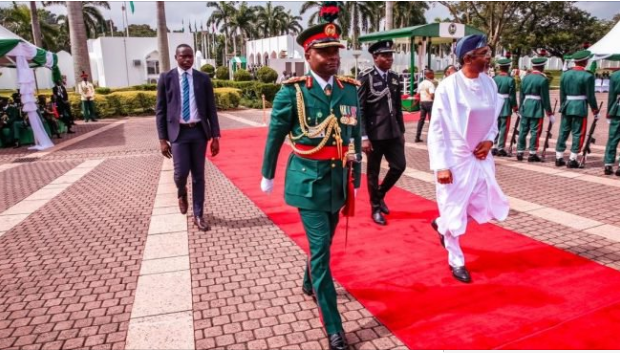 Social media is currently abuzz over an object underneath the attire Femi Gbajabiamila, speaker of the house of representatives, wore to the Independence Day parade at Aso Rock.

Beside Gbajabiamila was a top-ranking soldier while a police officer stood behind him as he stepped on the red rug laid for distinguished personalities.

However, moments after the parade was over, social media users started commenting on the activities and people drew attention to the object tucked inside the attire.

While some said it is a bulletproof vest, others said there could be more to it.

Below are some reactions on social media:

And you are wearing a bullet proof vest for Independence day celebration at the state house????
Gbaja, you too dey fear inside aso rock???
— Ellotts (@Iam_Ellotts) October 2, 2019

Speaker: Gbajabiamila
Wearing bulletproof vest under his agbada to today's independence day celebration,
They are even scared of there next level #freeSoworeNow pic.twitter.com/MmDMuOvxlA
— Ayo Prosper (@AyoProsper7) October 1, 2019

Perhaps, it's not bulletproof but embroidery, which means his tailor did a bad job. He needs to start using Ebuka's tailor. 😀
— Olusegun Iselaiye (@iotama22) October 2, 2019

The speaker of the Nigeria's house of representatives, Femi Gbajabiamila was spotted wearing a very obvious bullet proof vest beneath his "Agbada" clothing at the Nigeria's 59th independence day celebration. Why do the evil men run when no one pursues them? pic.twitter.com/YVUl2WU9GN
— okekings online Promoter (@okekingsonline) October 2, 2019

So Speaker Femi Gbajabiamila was afraid of GUN SHOTs right inside Presidential Villa such that he had to wear BULLET PROOF vest under his agbada at yesterday's Independence Day celebration?

So who is now safe in Nigeria if those in Aso Villa are afraid? pic.twitter.com/M9i1WTjDzL
— Lere Olayinka - Aresa 1 (@OlayinkaLere) October 2, 2019

@Gidi_Traffic SAFETY CONSCIOUS? The Speaker of the House of Representatives, Femi Gbajabiamila was on Tuesday spotted wearing what appeared to be a bulletproof vest under his white Agbada during the 59th Independence Anniversary parade held at the presidential villa in Abuja. pic.twitter.com/bg3NraiRS7
— AustynZOGS (@Austynzogs) October 2, 2019

Imagine Speaker Gbajabiamila wearing a bullet proof vest for yesterday's Independence with all the security they have given people in Nigeria? Are you afraid of death? @femigbaja pic.twitter.com/ww7qRHJeKS
— Rich 4 Ever (@Rich4theSkies) October 2, 2019