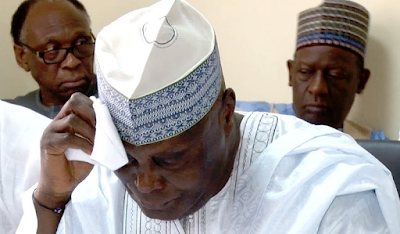 The Peoples Democratic Party and its Presidential Candidate, Atiku Abubakar, have mourned with the victims of the Onitsha market fire.

The party in a series of tweets on its Twitter handle said, @OfficialPDPNig is shocked by the devastating petrol tanker fire outbreak in Onitsha, Anambra state, describing the incident as heartbreaking and traumatizing.

@OfficialPDPNig is deeply saddened by the tragic occurrence particularly, the painful death of our compatriots, including the mother and child, who lost their lives in the inferno that also razed houses, shops and other valuables.

“Indeed, our party mourns. Our hearts ache as our prayers go out to the victims and the families of the deceased, who are now in anguish over their excruciating losses.


“Our party commiserates with the government and people of Anambra state and prays for the repose of the souls of the deceased”.

The Presidential candidate, Atiku Abubakar, said, “We’ve had many preventable fuel tanker tragedies. I received with sadness, reports of a tanker explosion in Onitsha, Anambra State, which caused massive destruction to lives and properties in Ochanja Market area. My prayers and thoughts are with the families of the affected”.

The party also urged public-spirited individuals and organization to support the government in finding succour for the victims over their losses.

It, however, called for an investigation into the remote and immediate causes of the accident as well as the circumstances that may have frustrated timely intervention in the tragedy.

The PDP called for measures are put in place to forestall a reoccurrence, as the safety and wellbeing of all Nigerians remain paramount to ‘our party’.