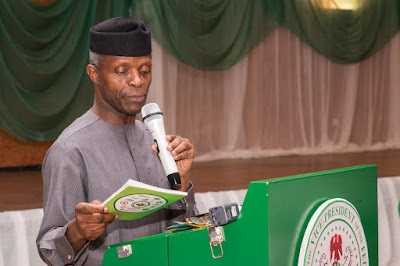 Vice President Yemi Osinbajo on Saturday in Lagos spoke glowingly of the University of Lagos (UNILAG) and members of its alumni association for being outstanding.

Osinbajo was the Special Guest of Honour at the UNILAG Alumni Association Golden Jubilee Awards and Gala Night held at the Lagos Continental Hotel, Victoria Island.

The vice president, who was one of the awardees, said that the university was a truly formidable institution.


“It is true; one of the many reasons why the University of Lagos is able to maintain such an excellent reputation is because of the people who have passed through its walls.

“Our very own association’s National President, Dr John Momoh is the Chief Executive Officer of Channels TV which is more than just a news channel.

“Tony Elumelu, is another example.

“Although a great banker and a very wealthy businessman, since he doesn’t share his wealth with us we are much more inspired by his philanthropy and his readiness to use the skills that he has gained from his wealth of experience to empower young Nigerians and Africans so that they might do the same.

“Genevieve Nnaji is another great example. She has been making waves in Nollywood since she was at university and has gone on to become a versatile, iconic asset for the industry.

“Her directorial debut, Lionheart, was the first Netflix original film from Nigeria and has been selected as Nigeria’s submission for the 2020 Oscar Awards.’’

The vice president also listed Bola Peters who was his student and founder of Terra culture.

Osinbajo said that Bola was the producer of several award winning musicals including Broadway-style musical production titled Wakaa the Musical, which became the first Nigerian musical to be staged in London’s West End.

He said that the alumni had dominated the private medical field from Dr Sunny Kuku and Eko hospital one time alumni President to the contemporary leaders in private medical practice Dr Yemi Omabowale of Reddington hospital.

The vice president said that no other university in Nigeria could boast of the number of senior advocates of Nigeria that the alumni had.

According to him, the association has about seven governors; one-third of the Senate and no fewer than 100 members of the House of Representatives including the speaker.

In his welcome address, Momoh said the event was a celebration of a milestone of 50 years of UNILAG.

He said that the association was blessed with some of the best talents in the world.

Momoh said that the awardees were being rewarded for their selfless service and contribution to human development.

In his remarks, Prof. Oluwayouin Ogundipe, Vice Chancellor, UNILAG, said it was a unique occasion to celebrate the alumni of a great institution.

He said that the institution was striving to produce students that would be globally competitive.

Ogundipe said that UNILAG students, who participated in international competitions, came out tops.

On his part, Chairman, Nigeria Governors’ Forum,  Gov. Kayode Fayemi, said he was a proud alumnus of UNILAG.

He said, however, that he concurred with opinions that urgent and practical solution was needed to the challenge of funding tertiary education in Nigeria.

Some other notable recipients of the Distinguished Alumni Awards were Governors Gboyega Oyetola of Osun, Babajide Sanwoolu of Lagos and Seyi Makinde of Oyo states.

Some of the recipients of the Special Recognition Award were Chief Emeka Anyaoku, Nigerian Diplomat and Third Commonwealth Secretary General,