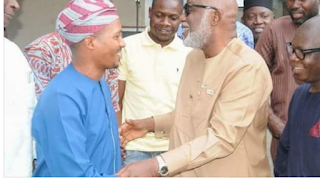 Donald Ojogo, the state commissioner for information, announced the sack of Pelemo in a statement on Monday.

Ojogo explained that the directive was based on the need to instill sanity “and nip in the bud divisive acts and tendencies inimical to the existing cordiality and cohesion in the state administration”.


While wishing her happy birthday on Sunday, he had described Ajayi’s wife as acting first lady.

“Happy Birthday to the Acting First Lady of Ondo State, Chief Mrs. Ajewole Agbola Ajayi, long may you live ma,” he had written.

“He was sacked based on his Facebook post, why referred to the wife of the deputy governor as an acting First Lady? Is he trying to cause division in the government?” he asked.

Akeredolu is currently on leave but his wife has been carrying on with her duties.

Asked to comment on the development, Segun Ajiboye, spokesman of the governor, simply said: “Please, follow what’s in the statement.”