No going back on paying above N30,000 minimum wage – Sanwo-Olu vows 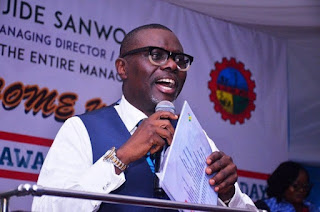 Lagos State Governor, Babajide Sanwo-Olu has again promised to pay above N30,000 minimum wage to Lagos workers, considering the special status of the state, saying the state is technically ready.

This assurance is coming just as he sued for continued harmonious and peaceful relationship between government and Labour Unions in the state.

Sanwo-Olu, who hosted members of Lagos State Public Service Joint Negotiating Council, JNC, Nigeria Labour Congress, NLC and the Trade Union Congress, TUC at the Lagos House, Ikeja, also charged the Labour leaders to key into government’s agenda on the environment, as well as partner government in sensitizing members on need to have positive attitude on environmental issues.

The governor said the implementation of the new minimum wage payment would take off when the Federal Government and labour unions concluded their negotiations.

The State, he said, was drawing up its finances and creating additional revenue sources that would enable the Government sustain the new minimum wage payment.

Sanwo-Olu said his government understood the day-by-day challenges being faced by workers in the State to do their tasks, which informed the decision by his administration to pay more than the N30,000 minimum wage benchmark.

The addition, the governor pointed out, was to motivate workers and encourage them to cope with challenges that may hinder their productivity.

He said: “As a government, we take the issue of minimum wage very seriously. We know how important and germane it is to the wellbeing of our people. We are technically ready to implement the new minimum wage. I made commitment during my previous interactions with the labour unions before my assumption of office and I am still keeping to the promise made. However little it is, we will certainly pay more than N30,000 minimum wage.

“We understand the position Lagos occupies and we understand the challenges workers are facing in Lagos. If other states can raise up to that amount, I believe Lagos needs to show a bit more to appreciate workers’ contribution to the growth of our State.”

During interaction with the labour unions’ leaders, Sanwo-Olu listened to various demands of the workers, which included arrears of workers’ medical allowance, introduction of premium insurance for the workforce, timely pension payment for retired workers, mortgage scheme for housing, befitting labour secretariat and representation of workers’ unions in MDA boards’ appointments.

Sanwo-Olu said he had directed the Commissioner for Finance to look into the unpaid arrears of workers’ medical allowance, with a charge to clear the backlog and make payment to the affected workers. The Governor added that the State was planning to absorb its entire workforce in the recently introduced health insurance scheme, observing that the Ministry of Health was harmonising the modality to ensure all workers were covered in the scheme.

The Government, Sanwo-Olu said, will collaborate with the Organised Labour Unions to float a post-retirement housing scheme that would enable workers of all cadres to apply and acquire permanent homes after leaving the service. Lagos, the Governor promised, would be donating land for the purpose, while the labour unions would source for finance to develop the scheme.

In addition, Sanwo-Olu said his government had approved discounted rent for the workers occupying State-owned apartments. This, he said, is part of the welfare programmes introduced by his Government to improve workers’ productivity.

The Governor said his administration had started to tackle challenges limiting the workers’ productivity, including massive rehabilitation of critical highways across the state to reduce travel time and diffuse road congestion.

It was a moment of excitement for the union leaders, following the Governor’s pronouncement to pay above the minimum wage. They described Sanwo-Olu as “a listening leader” and observed that the Governor had started to fulfil promises made to the unions in the build up to the 2019 elections.

Chairman of Lagos Council of Trade Union Congress (TUC), Comrade Gbenga Ekundayo, listed re-introduction of Town Hall meeting with labour unions and appointment of more women into the State’s cabinet as part of the promises fulfilled by the Governor.

Chairperson of the Lagos chapter of the Nigerian Labour Congress (NLC), Comrade Funmi Sessi, described workers as government’s partners in progress, while appreciating Sanwo-Olu for keeping some of his promises with the workers’ unions.

She promised that the Organised Labour would continue to support the Government’s efforts towards improving the wellbeing of the residents and workers in the State.

Top government officials who joined Gov. Sanwo-Olu at both meetings with Organised Labour Unions’ leaders included the Commissioner for Establishment, Training and Pension, Mrs. Ajibola Ponnle, and HOS, Mr. Muri-Okunola, among others.