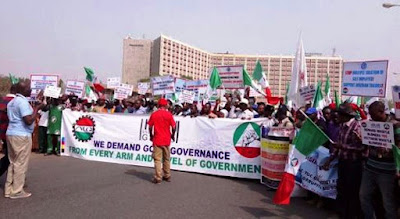 The Nigeria Labour Congress (NLC) – has warned its state councils against rushing into negotiations with state governments on the minimum wage consequential adjustments.

It urged them to await the Federal Government’s template in line with last week’s agreement.

NLC’s Acting National President Amaechi Asuguni told reporters that the decision was part of the outcome of the NLC 2019 National Leadership Retreat that ended on Thursday at Nike Lake Resort, Enugu.

Asuguni, who is the Congress’ First Deputy President, stood in for the National President, Ayuba Wabba, who left the retreat on a trip outside the country.


He said the national leadership of NLC would send monitoring committees to states to ensure standardised agreements so that no state will shortchange others.

Asuguni said: “The outcome of this conference is that the agreement has been reached, a table will be worked out at the federal level and sent to the states.

“We want a table that will be brought out to be a guideline so that start councils will not go and state formulating different tables, so that there will be a minimum standard.

“That is our position; that headquarters of NLC will guide the states so that they will work within the benchmark of the table so that we don’t have a staggered or any how agreement by state governments and Labour.”

The NLC urged its members not to be in a hurry, saying it has not been easy to reach the agreement, and having reached the agreement, there is need to put in certain things in motion to come out with the table.

He said: “You can see the percentages; they are different, with different categories of levels. So, it will be worked out holistically. You don’t just rush. This table, hopefully by next week, we are thinking it should come out. It is not something to be rushed out.

“We want the workers to be patient, the patience they had while the negotiation lasted, they should have that patience. The agreement has been signed, the consequential adjustment agreement has also been signed, we are just waiting for time for implementation.”

The Labour leader said that it will be unfortunate if any state refuses to comply with the new minimum wage act, and vowed that “Labour is there to engage them by any means legally possible.”