Nigerian refineries fail to process crude oil in one month

8:22 AM CuteNaija 0 Latest News in Nigeria 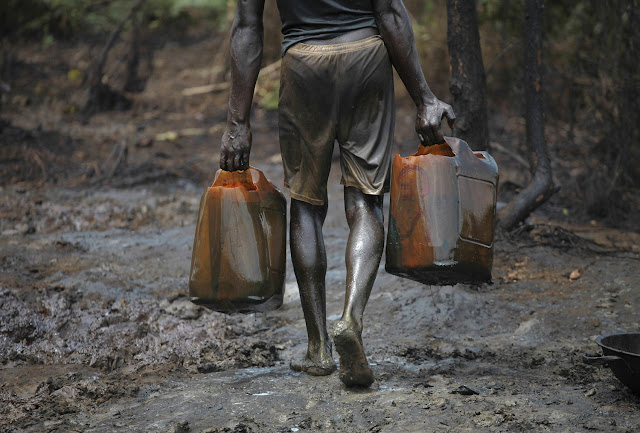 The combined yield efficiency of Nigeria’s refineries has crashed to zero, the latest report on the performance of the facilities has shown.

In the report, which was released by the Nigerian National Petroleum Corporation, the refineries also performed woefully in terms of the volume of crude oil they processed.

The corporation stated in its just released monthly financial and operations report for July 2019 that the three refineries processed no drop of crude oil and produced no product during the month under review.

An analysis of the combined performance of the facilities also showed that after they recorded an opening stock of 212,165 metric tonnes, the refineries posted zero per cent as crude processed, finished and intermediate products.

They also recorded zero per cent as plant consumption, losses and capacity utilisation. Their combined plant capacity was put at 445,000 barrels per day.

The NNPC said, “In July 2019, the three refineries processed no crude and produce no product for the month as against 38,977MT processed in June 2019.

“Combined yield efficiency is zero per cent compared to 31.19 per cent recorded in June 2019 owing largely to rehabilitation work being carried out in the refineries.”

The national oil firm insisted that the poor output of the facilities was due to the work being carried out on the refineries.

It said, “For the month of July 2019, the three refineries produced no intermediate product, hence, combined capacity utilisation is at zero per cent.

“The waning operational performance recorded is attributable to ongoing revamp of the refineries which is expected to further enhance capacity utilisation once completed.”

The NNPC also stated that the refineries posted a loss of N13.84bn in July 2019.

The report stated, “The corporation has been adopting a Merchant Plant Refineries Business Model since January 2017. The model takes cognisance of the products worth and crude costs.

Kyari, in a message he retweeted, also stated that gas infrastructure development was discussed with the Russian investors.

He stated that a team involving himself, the Minister of State for Petroleum Resources, Timipre Sylva; the NNPC’s Chief Financial Officer, Umar Ajiya; the NNPC’s Chief Operating Officer, Refineries, Mustapha Yakubu; among others, engaged the investors during the Russia/Africa Economic Forum in Sochi, Russia.

He added, “Refinery rehabilitation and gas infrastructure development on the front burner.”

Nigeria’s refineries had over the years been performing abysmally, as they continue to fail to meet up to less than 50 per cent of their capacity utilisation.