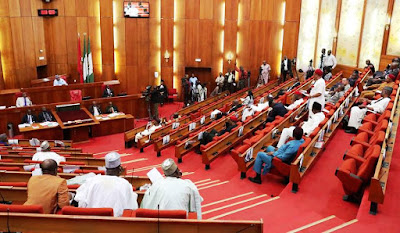 The Joint Committee Chairman ,Senator Peter Nwaboshi isdued the summon at the end of an interactive session with , NDDC, Central Bank of Nigeria, CBB and Union Bank.


The oil companies are expected to appear before the joint Committee by next week Wednesday.

Speaking after the meeting, Senator Nwaboshi said that the companies are invited to explain lawmakers why they will are not obeying the law.

According to him, we have invited all oil companies indebted to NDDC to come and tell lawmakers why they will not obey the law of the country. Some of the have confirmed that they owning NDDC.

He added that NPDC is owning N54n as at when the last calculation was done, Allied is owning $43m, Pan Ocean is owning $46m.

He also revealed that Federal government is owning NDDC over N1 trillion.

Nwaboshi who expressed dissatisfaction with the failure of oil companies to pay NDDC said that the Senate made efforts in the last Senate to ensure prompt payment of money meant for NDDC.

Speaking on the directives from President Muhammadu Buhari to forensic audit of NDDC , the Chairman of the Committee said that the Panel has also resolved to do full audit of NDDC.

He said, ” we welcome forensic audit of NDDC, Eight Senate did technical audit and our findings is very appalling, we are going to our own full investigation. We have resolved to do full audit of NDDC. ”

He also said that the Committee discovers money meant for NDDC in the Nigerian Port Authority (NPA) adding that it was wrongly credited into NPA’s account and the Committee has mandated the CBN to return the money into NDDC account.