3:56 AM CuteNaija 0 Latest News in Nigeria 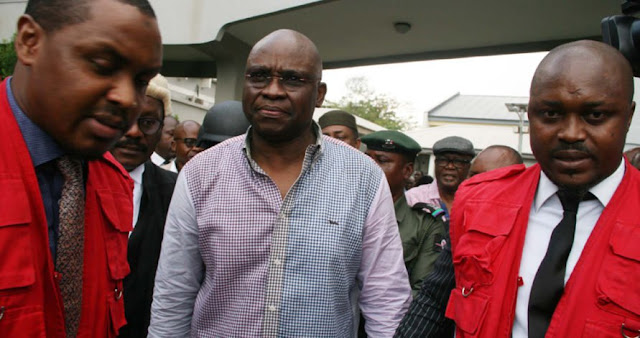 The N2.2bn fraud trial of former Ekiti State Governor Ayodele Fayose was stalled on Friday as the Economic and Financial Crimes Commission accused the ex-governor of threatening and compromising one of the prosecution witnesses.

Lawyer for the EFCC, Mr Rotimi Jacobs (SAN), told Justice C.J. Aneke that the anti-graft agency had decided to replace the one allegedly compromised by Fayose.

The prosecutor said as a result of the alleged threat and compromise, when Aladegbola appeared before Justice Mojisola Olatoregun, who was earlier hearing the case, the witness turned around in his testimony to give a different evidence from what he wrote in his statement at the EFCC office during investigation.

“It is only in our country that this can happen; the witness was compromised by this defendant,” Jacob said.

He accused Fayose of attempting to pervert the course of justice, saying, “If not because of my intervention, this defendant would have been facing another charge.”

The defence lawyers contended that the prosecution did not have the liberty to change a witness because such a witness failed to give evidence favourable to them.

Olanipekun and Ojo described the attempt to replace Aladegbola with Abidakun as an abuse of prosecutorial power by the EFCC.

They urged Justice Aneke to stop Abidakun from testifying in place of Aladegbola, who had earlier testified before Justice Olatoregun.

But the prosecutor insisted that the proceedings before Justice Olatoregun were no longer relevant as the matter had started afresh when the case was transferred to Justice Aneke.

“To prevent this witness from testifying will run afoul of Section 379 of the Administration of Criminal Justice Act 2015,” Jacobs argued.

Following the heated arguments between the prosecution and the defence, Justice Aneke adjourned till November 28, 2019 for ruling.

In the charges, the EFCC alleged, among others, that Fayose, on June 17, 2014, “took possession of the sum of N1, 219, 000,000 to fund your 2014 governorship campaign in Ekiti State, which you reasonably ought to have known formed part of the proceeds of an unlawful act, to wit: criminal breach of trust/stealing.”

The ex-governor was also alleged to have on the same day “received a cash payment of $5,000,000 from Senator Musiliu Obanikoro, then-Minister of State for Defence, which sum exceeded the amount authorised by law and you thereby committed an offence contrary to sections 1 and 16(d) of the Money Laundering (Prohibition) Act, 2011 (as amended) and punishable under Section 16 (2)(b) of the same Act.”