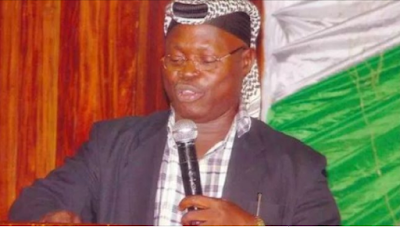 Recall that NigerianEye had reported that nine children were kidnapped in Kano and taken to Onitsha in Anambra State where they were sold.

Reacting, MURIC had described the abduction as kidnapping for Christ, claiming that nine Muslim children were converted to Christianity and sold into slavery.

But, Fani-Kayode countered the Muslim right group for its claim, insisting that the abduction was an act of wickedness which has nothing to do with religion.


However, MURIC Director, Professor Ishaq Akintola, faulted Fani-Kayode for attempting to downplay the abduction of the children.

The statement signed and sent to NigerianEye reads: “Ex-Minister of Aviation, Femi Fani Kayode (FFK), on Monday, 14th October 2019 sought to downplay the abduction of nine Muslim children who had been kidnapped, sold into slavery and converted to Christianity. The children were abducted in Kano and taken to Onitsha in Anambra State but were eventually rescued by the Kano Police Command.

“Subsequent press statement issued by the Muslim Rights Concern (MURIC) accused the abductors of kidnapping the children for Christ. But FFK reacted by attributing the abduction to criminality only and that it had nothing to do with religion.

“Not satisfied with FFK’s reaction, the Islamic human rights group on Friday, 18th October, 2019 rejected FFK’s pontifications and described them as misleading, deceitful and unrealistic.

“We reject Femi Fani Kayode’s pontifications. It is misleading, deceitful and unrealistic. FFK is playing Jekyll and Hyde. Why are all the kidnappers Christians if it has nothing to do with Christianity? Why were all the victims Muslims and why were the victims’ names changed from their original Muslim nomenclatures?

“FFK has committed a fundamental blunder. Was he not the one that came out with scud missiles shelling mercilessly from all artillery machines in March 2016 over the Ese Oruru imbroglio? There was nothing he did not say at that time. FFK should listen to himself sometimes.

“Concerning the October 2019 issue of kidnapping, conversion and sale into slavery of nine Muslim children whose ages ranged between 4 and 10, FFK has this to say today: ‘Nobody kidnaps for Christ…It has nothing to do with God. It is a human failing and not a religious one.’

“Et tu FFK? Can you recall what you said in March 2016 concerning the simple case of two lovers eloping? It was on the Ese Oruru controversy and you linked it to the Emir of Kano. There is no gainsaying the fact that allusion to the Emir tantamounts also to allusion to Islam. He is an undetachable symbol of the Islamic faith.

“Not done, you launched another vitriolic attack on the Sultan of Sokoto in the same piece when you wrote in the case of Patience Paul. ‘This time it is a young 17-year-old Christian girl, by the name of Miss Patience Paul, who has been abducted from her home, parents and loved ones in Benue state, forcefully taken to Sokoto state and kept there against her will in the Sultan’s palace (https://www.pulse.ng/news/local/ese-oruru-emir-sanusi-should-tell-us-what-he-did-with-abducted-teenager-fani-kayode/pdtg2cc).

“Et tu FFK? You launched verbal halitosis against our revered leaders in one single outburst but now it is no longer about religion. What double standard! When it was Patience Paul you remembered it was about a ‘Christian girl’. When it was about Ese Oruru you made defamatory and libelous statements against our respected Emir of Kano.

“But when it came to the turn of Christian kidnappers who actually went out of their way to baptize Muslim kids to Christianity your integrity test failed you and it became a non-religious issue. Now you are telling us ‘Nobody kidnaps for Christ’. You can say that again. You have forgotten that what goes round comes around.

“By the way, what has FFK got to say about another case of abduction of a 6-year-old Muslim boy, Ukashatu, who was kidnapped, baptised and sold to Madam Christiana. Perhaps FFK will tell us that Christiana is not a Christian name? Anyway, Madam Christiana gave Ukashatu a Christian name, Michael. Ukashatu was not found until a few days ago. He is now Michael, aged 14. (http://katsinapost.com.ng/2019/10/15/icymi-igbo-woman-abduct-6-year-old-boy-from-katsina-convert-him-to-michael/).

“The same FFK left the path of profundities for that of banalities and threw courtesy and decency to the winds to embrace vulgar and unprintable words in his vituperations against Akintola over the BB Naija affair.

“In his own words, ‘Sheikh Akintola wants @BBNaijafan banned because he is addicted to the show and each time he watches it he has a loud, explosive and uncontrollable orgasm and fires an accidental discharge into his pants. So much for being a pious and disciplined scholar and cleric.’ (https://www.naijaloaded.com.ng/news/bbnaija-fani-kayode-blasts-muric-for-demanding-a-ban-on-the-reality-tv-show) We urge Nigerians never to take FFK serious again.

“About three Kano-based non-governmental organisations recently complained about the systematic and sustained abduction of Muslim children by Christian groups from a certain part of the country in the past ten years. FFK and his cohorts should, therefore, stop defending the indefensible. They should leave the security agencies to do their investigations.”

MURIC, however, advised the former minister to be sincere in his dealings with Nigerians.

“We advise FFK to be sincere in his dealings with Nigerians. Sincerity is in admitting that the Christian abductors actually baptized the children but that all Christians, including FFk, reject the conversion. That was what MURIC did when the notorious Boko Haram insurgents claimed to have converted the Chibok girls way back in 2014.

“For the records, MURIC said in its press statement of 13th May, 2014, ‘We have no iota of doubt that the girls ‘converted’ under duress. Such ‘conversion’ is null and void under the Shari’ah. The Glorious Qur’an is very explicit in this regard as it says, ‘There is no compulsion in religion…’ (Laa ikrahun fii ad-diin” (Qur’an 2:256).

“We also sent a strong message to Boko Haram, ‘A man who orders the invasion and kidnap of innocent young girls is honour-blind. Shame on Boko Haram! Shekau has no modicum of integrity left in his anatomy.’ In addition, we called the ‘purported’ conversion ‘cowardly and shameful’. We said conversion to Islam should be an act of free will. We did not conjure that statement. It has been there for the records since May 2014. See https://www.legit.ng/66203.html.

“FFK razzle-dazzles Nigerians with his Islamisation and Fulanisation mirage. But he closes his eyes to Afeniferisation and hobnobs with Igbonisation and Biafrisation. He sees religion in the Ese Oruru and Patience Paul affairs. But he discards the Kano 9 saga as a mere crime. To FFK, Christiana is not a Christian name and changing Ukashatu to Michael is not Christianisation. FFK is a bundle of contradictions.

“FFK should realize that he is a leader and a leader should lead responsibly. He should stop manifesting double standards. Playing to the gallery, particularly using inflammatory statements and double-speaking are not characteristics of responsible leadership. Christians and Muslims in Nigeria share the same destiny and the leaders must not steer that destiny towards ruination.

“In conclusion, we appeal to Nigerians to always consider issues dispassionately. We should all reject and expose the criminals in our midst. There should be no attempt to extenuate the crimes of brothers-in-Christ or those of brothers-in-Islam. Crime is crime whether it is committed by a Christian or by a Muslim. It has no other name. We must also boldly and objectively reject attempts by fanatical Christians and Muslims in our midst to seek conversion using fair and foul methods.”